Review of: The Merchant of Venice

‘We all ignorantly role play’ could be one of the more enduring messages to take away from Rupert Goold’s revival of his 2011 The Merchant of Venice set in the betting halls of Las Vegas. 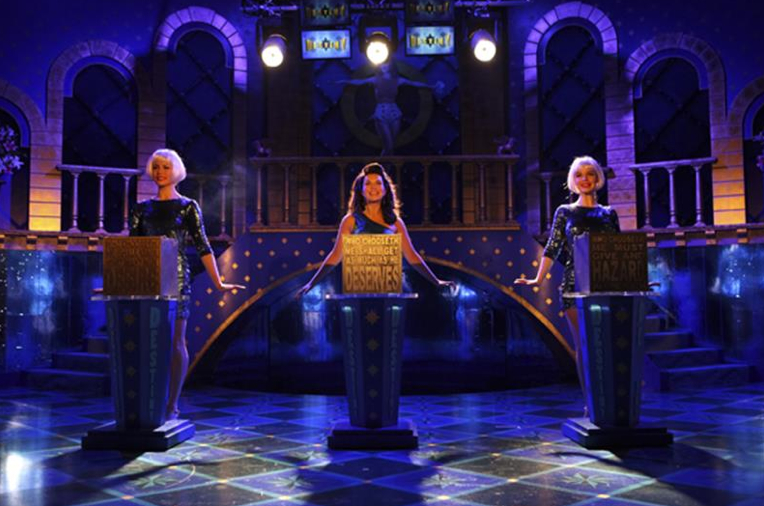 Opposing forces Shylock, played by Ian McDiarmid, who gives us a stubborn and complicated money-lender, and Portia played by Susannah Fielding, who’s bride to be is not what she seems, come to blows over Scott Handy’s Antonio, who easily could have just stepped out of an Ibsen play such is his melancholy and bearing, but before doing so, tear off their respective wigs. Shylock goes first as he sadly ruminates over the loss of his daughter, and Portia after she has won the hand of Bassanio [Tom Weston- Jones] and takes a break from the casket scene, here reimagined as a sordid midWest daytime TV show. The point being she is not after all the glib Texan Doll who dresses up as Hesione and looks like she’s the subject of a Louis Theroux documentary and whom the audience laugh at insatiably, but a hard calculating woman who will do anything for the man she loves, although to the rendition of Are You Lonesome Tonight by Elvis impersonator Launcelot Gobbo [Jamie Beamish] you quickly realize that she realizes she has lost that love as she squirms like a music hall girl singing in the radiator like a scene from Eraserhead.

And there is something violent in this defrocking- although with Shylock one senses he is a man for whom the weight of the world and his persecution lies heavy on his shoulders, and so pulling open his shirt is sacrificial- for others it is crucifixion time, in a reflecting action in the court scene, Antonio’s orange jump suit is torn apart as if an inverse Bar Mitzvah, with Shylock drawing a crude Teffillin like shape in black on his chest to mark out the flesh that must be cut. One also must start thinking of homoerotic icon St Sebastian here.

In what must be one of humanity’s bleakest plays ever to run such a damning critique on the state of man, the love between Antonio and Bassanio which disconcerts Portia so much, is the play’s saving grace, and one grabs onto their relationship with relief, although one wonders where it can go.

And in some ways it matters not that the play tackles particularly anti-Semitism, racism and I might add, in this production at least, a fair amount of misogynism. Any ‘ism’ might well be the play’s subject in today’s world where we know that behavior motivated by judgment and discrimination of any kind exposes those grim, less nice personality truths of human nature just lurking below the surface, and which is exposed by the power of ‘accurate observation’ otherwise ‘called cynicism by those who have not got it’ or so would quote George Bernard Shaw. However, at the same time, it is the mark of this play and the mark of our times that its themes and exposing of particular discriminations is still reflective of the world we see around us- even if, in the Western world at least, it is in more subtle ways. But also Antonio telling Shylock he must become a Christian or suffer the consequences, a reaction to Shylock’s earlier drawing on his skin, is not so very far removed from an Isis terrorist threatening refugees on top of a mountain to join the Islamic State of Iraq or pay with their lives.

We also get a modern version of the humiliation suffered by Shylock as he is brought to his knees. Such is man’s desire to feel he is part of the fold and not the rejected other and therefore superior enough to judge someone he sees as an ‘alien’, he becomes an unconscious animal- in a brilliant move Gratiano [Anthony Walsh] and Salerio [Raphael Sowole] silently film Shylock on their mobile phones as he crawls out of court on his belly- you just know the footage will go straight to Face Book and Twitter, thus completing Shylock’s humiliation in the eyes of the world and complementing the production’s obsession with the media devices that now form such a huge part of our story telling lives.

It’s often noted of different productions that some directors choose to stage The Merchant of Venice as an anti-Semitic play, rather than a play that exposes such tendencies. Rupert Goold’s is the latter. The production is Shaw like in its tendency to show us stereo types who are not stereo types- for example the nerdy  almost Born Again Christians Jessica [Caroline Martin] and Lorenzo [Finlay Robertson] seem exactly that- nerdy- yet their hard line attitudes towards Shylock, careless attitude towards money and also obvious love for each other, is also explored. It seems no one can escape Shakespeare’s or Rupert Goold’s critical eye. One does wonder how far the Las Vegas metaphor can be pushed- how seriously those Texan girls can really be taken- for aren’t they just an imagining of what we think girls like these might be like? Until one realizes it is just another layer, just another role-play the characters fall blindly into and in the end it does not obfuscate meaning but rather enhances it.

Harold Pinter once wrote about Shakespeare ‘ the mistake they make, most of them, is to attempt to determine and calculate with the finest instruments, the source of the wound’- here we just get given the wounds and watch as they get bigger and bigger. Neither can much sense be made of this as Portia realises, knowing that saving Antonio’s life for her lover Bassanio, might also jeopardise her relatedness with him- again, as Pinter said, no sooner have you ‘grappled with a perspective, the horizon collapses and another reforms.’

It’s this devastation that this production also charts. Unflinchingly cruel yet not cynical for its truth, and with a cast clearly enjoying themselves and playing as a great ensemble, The Merchant of Venice at the Almeida is worth seeing more than once or even twice, to do the play and the production justice.