Review of: Jack and The Beanstalk

this panto manages a rare thing- an evening of light heartedness, comedy and fun audience participation with some sophisticated theatrical paradoxes

It’s panto and not as we know it at the Park Theatre, with Jez Bond and Mark Cameron’s version of Jack and The Beanstalk, a continuation of their Chronicles of Waa and last year’s hit Sleeping Beauty. 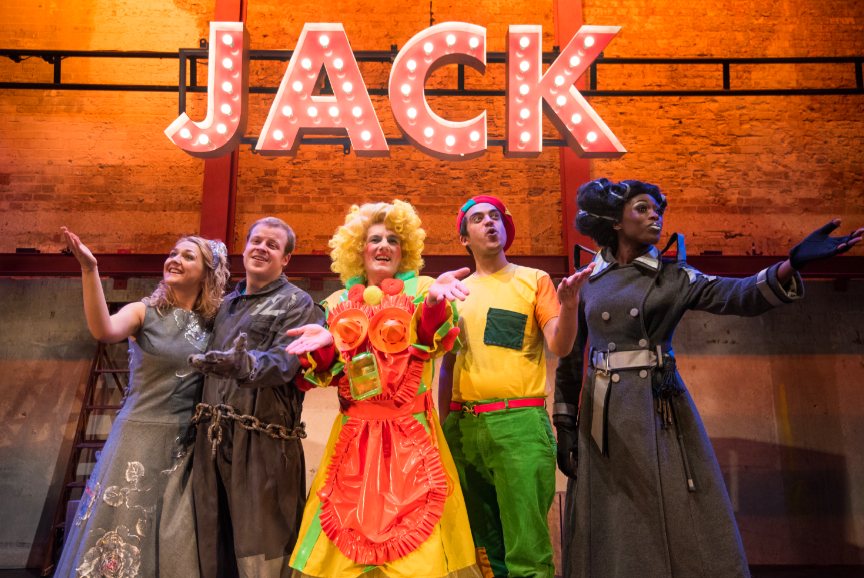 It’s an over used term ever since Michael Billington applied it to Richard Jones’ Annie Get Your Gun in 2009 but its lack of sets and reliance on props [and their quirky reference to contemporary culture] makes it a bit Brechtian and certainly a more Commedia dell’ arte take on our traditional Christmas theatrical fair.

But we begin with a group of actors gathering to play Hamlet, although, by common consent, it’s quickly decided to perform the fairytale instead. Now we are in the world of boss Ms Grimm [transforming from Gertrude] Jez Bond and Mark Cameron’s story beginning in a bean factory where giants are slaves and where Ms Grimm’s daughter, Grenthal [Ophelia] is in love with one of the smaller giants, Geoff [Laertes]. As she is under the threat of an arranged marriage they soon plot to escape, with disastrous consequences. Cut to the land of Nowen and Jack [Hamlet] and his Tupperware consultant mother Tina [Grayson Perry anyone?] living in dire straits. The land is stricken with bovine earwig flu and they must hide their cow Daisy from the incompetent and corrupt animal inspector. Eventually of course, Jack finds a/ the bean, which has something to do with Ms Grimm and Geoff and Grenthal, and makes the dreaded climb to the top of the beanstalk to find- I won’t reveal- but suffice to say, both plots come together and everything turns out happily ever after. Naturally.

But not quite. Because ring fencing a panto which in itself is not traditional in the Hackney Empire sense of the word, with Hamlet, complicates the issue. Perhaps lying at the heart of this very modern stripped back re working of the traditional Cornish legend of Jack, are the ideas the conflict between the panto’s stylistic device of a play within a play produces- and with it, a comment on fate and following one’s inner light. On the one hand, we have a bare stage and costume rail and written parts for the Stage Manager and ASM – its street theatre, with everyone included. We have the traditional norms of the male Dame, the colourful costumes, audience participation [in this performance it just so happened we got Sir Ian McKellen who instantly pretended to be Derek Jacobi] and singing- the usual call and response techniques. And of course, good conquering evil. But to parallel the panto with Hamlet means we have to question whether good does conquer evil all the time- Polonius’ famous speech to his son Laertes, included here, tells us it does not – Polonius follows his own advice but still ends up badly. As in the panto, the characters in Hamlet follow their own truths, its just that here these truths lead to tragedy. In contrast with Jack and The Beanstalk, where everyone’s truths lead to a happy ending. In this way, this panto manages a rare thing- an evening of light heartedness and comedy and fun audience participation with some sophisticated theatrical paradoxes that children and adults alike can understand.

True to the spirit of panto, the cast is small, with only 5 talented and energetic players performing at least 19 roles- Michael Cahill, Omar Ibrahim, Gloria Onitiri, Killian Macardle and Paige Round are to be commended for their commitment to such wide ranging and physically demanding parts. Nicely directed by Jez Bond, one overriding message could be ‘To thine own self be true’ with an appendage pointing out that this does not mean that things will turn out how you want them to. Although for Jack etc, it does of course. It’s just pot luck whether you get to play Jack or Hamlet.