this play isn't just a plea for devolution, it's also a clear eyed unsentimental and scrutinising look at how we live, protest and help and care about each other now in a post Thatcher post 9/ 11 and 2008 economic bust universe

According to Simon Stephens and Jack Thorne all writers have myths and Jack Thorne, in a Guardian article, wrote that he thought that his was ‘to do with help- what help is and the struggle we go through trying to help others, and perhaps what failure to help looks like.’ 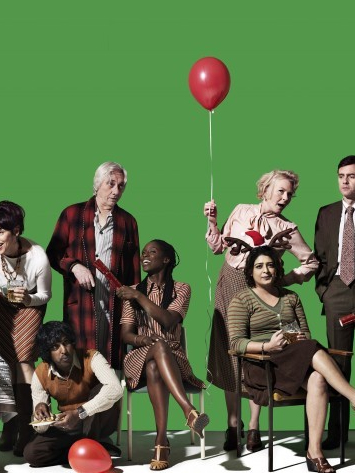 These key themes, help and failure, are at the heart of his new play Hope, directed by John Tiffany and just opened at The Royal Court’s Jerwood Theatre Downstairs. Set somewhere in a Northern City in the town’s Council Chambers, we meet deputy Mark [Paul Higgins] and his leader Hillary [Stella Gonet] as they fight over the services the Labour Council must cut if they are to meet targets set by central government. But in this ‘working class’ city demands for essential services have not abated, yet some of these services must close in order for the council to lose a staggering 22 million from their budget. Soon Mark and Hillary are waging war not just with themselves but with other councillors Sarwan [Rudi Dharmalingham] Lata [Nisha Nayar] and Julie [Sharon Duncan- Brewster] also Gina [Christine Entwhistle] Mark’s ex-wife who runs the day centres under threat and eventually, the Pakistani and Bangladeshi communities, who take the brunt of the child care cuts. When this leads to the involvement of the EDL and the death of a Pakistani man in a previously lit street now darkened to save money, consciences start to prick, until Sarwan comes up with a previously unthought-of , but not impossible, way for the council to rebel- this action though brings about its own moral complications and ambiguity.

The play is timely of course, around 52% of our councils are not well positioned to meet their financial goals and severe cuts to essential services are predicted. So is this play a plea for councils to have far greater financial control- if Holyrood can have that power, then why shouldn’t their English counterparts also be entrusted with the same responsibilities? But it would do the play a great disservice to imply it’s merely about facts and figures and a plea for devolution- it isn’t just, it’s also a greater look at how we live and care about each other and protest now- post Thatcher and post 9/11 and 2008 economic bust. On the one hand, Gina’s galvanizing of locals to save her day centres seems admirable work [Jack Thorne brings us nicely close to the community that will suffer in the form of Jo Eastwood playing Laura] yet is it? She garners thousands of signatures and on-line Twitter support that leads Ed Miliband to threaten the council with the withdrawal of his support- yet where is the real rebellion, the real revolution when it can be done with a click of a finger? Granted she forces the council into a U- turn but all this means is that some other community service will suffer instead- i.e. the SureStart schemes, rather than her own day centres. And so the point seems to be also made that whilst we are looking at a community of people who care- the councillors included- the care is Thatcher ite and individualistic- the community cannot pull together and support each other, rather it is reduced to infighting- which relates remarkably well to the recent behaviour seen on Black Friday, where desperate consumers were driven purely by their own needs. Thatcher didn’t teach us about society and identity and community and it seems we are seeing the remnants of that in this play and in the world around us now.

But the play is not as cynical as all this. Its greatest achievement is to show us the multi dimensionality of the councillors who are ‘heroic’ and struggling with their own individual problems- John Tiffany gives us some wonderful almost physical movement pieces to give us a sense of the characters’ inner turmoils. Each character struggles with different sets of personal problems, Mark in particular with his alcoholism and power struggle with his wayward son Jake [Tommy Knight]. Hillary is not as stuck up as we think, and made me think of Skylight’s Kyra Hollis [David Hare]- for all the money she may earn, she still lives way below her means and we have Tom Georgeson as George, who looks like he’s an old Liverpool city council stalwart and is hurting at the disparity between Old and New Labour.

But ultimately, what you take away from Hope is the council’s big gesture- is it a heroic but utterly meaningless empty act full of big words but which is done in order to pass the buck and appease its own conscience, or is it the act of a council really trying to help but failing? Like the two books Jake is shown to be reading during the course of the play, this depends on whether you are interested in words- as Jake is with J.D Salinger’s Catcher in the Rye or whether you might chose to view the play through the lens of Great Expectations which, is more humane and where, both George and Jake decide, everyone tries- and it’s the trying that counts. Which ever, you should leave the theatre motivated for change and perhaps also,  more factually informed about cuts that may hit us all soon.

Hope is at The Royal Court until 10th Jan