1927’s multi media new production at the Young Vic, written and directed by Suzanne Andrade, offers a vision of what would happen if humanity went mad and bought themselves a load of Golems, a mythical servant man made of clay. Golem originates from a series of varying Jewish traditions, although it is worth knowing that in Talmudic legend, Golem means a body without a soul- it is commonly thought that Adam was one of the first Golems ‘kneaded into a shapeless husk’ and close to God- an important element in this production as it is a reminder that we are all responsible for what we breath life into- we can’t somehow be controlled by something we create as if it is outside of ourselves, although to negate responsibility we are encouraged to have that common misperception. 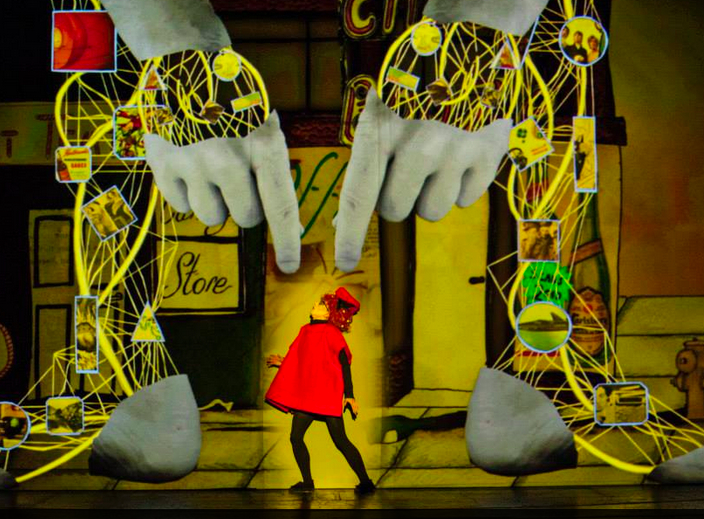 This Golem though, using at times Monty Python-esque animation and drawing on expressionistic films such as The Cabinet of Doctor Caligari and Metropolis in style and theme- both reflecting on the similar concerns of Somnambulism and repressed workers- uses a combination of self reflective animation by Paul Barritt with live performance and music to give a modern take on Gustav Meyrink’s Der Golem- who was originally conjured into being to protect Prague’s Jewish inhabitants from persecution. The 90 minute piece introduces us to Robert Robertson ( Shamira Turner) considered by all a loner and weirdo, who buys himself a Golem from a fellow weirdo and outcast, to cheer himself up and even protect himself from the hostile and polluting thoughts of others- but what follows is a stripping away of all his innate goodness as he is manipulated by the puppeteers behind the Golems- the corporation that owns them- into a selfish and unconscious man who mercilessly dumps his hard won girl friend for being too frumpy and turns on his co- workers as a vicious supervisor.

The show is aimed at everyone- all those simply seeking their own pleasure- and not just the ‘I-pad’ generation. It is a timely bit of anti Christmas programming at the Young Vic but one which should be applauded- and in this world of the hideous Black Fridays and incessant and abhorrent mind controlling advertising that delineates any values worth having, this is surely no bad thing- perhaps it’s also a comment too on the seeming incessant homogenous hollow gentrification of London where every street has at least one Costa, Tesco and Sainsbury’s, including the Cut, the street where the Young Vic resides and which is experiencing a slow erosion of most things that gave it character. And if it provokes people into reassessing what they value- including their time and what they are forced to do at work and how they are treated, and whether, in their hearts, this is acceptable, then the show will have done its job as well as anything that Russell Brand is attempting to do with his You Tube series The Trews and expensive books- hint you can see this show for less than the price of Revolution and it may even stay longer in the memory.

Neither must the performance be interpreted wrongly. Golem could actually be a lot of help to the needy, if it weren’t for man’s need to have revenge on those who have done him wrong, and in doing so, mistakenly think he is partaking in a revolution. In this respect, Golem is an anti-hero. Firstly, he is not unsympathetic. And although it seems he is here to reawaken the worst possible desires in human beings, it is not his fault, and this appeal is also our saving grace, our wake up call- he is our inverted protector as well as Robert’s seemingly overt one. Golem is not just about manipulative technology taking over our lives and lessening our ability to communicate and increasing our desire for more, it also about understanding the powerful political and social forces behind the technology and the desirous greed of those wishing to exploit those very same desires and indulge in revolution for themselves. Recall the horror scenes around Black Friday, the 2011 Riots and Golem makes a lot of sense when it claims to be about not the fear of the machine taking over man, but about man becoming a machine.

The self-reflexivity of the piece also allows this perspective. Golem is animated but the characters whose lives he affects, are actors and real people. We are continually reminded we are stepping in between two worlds, as easily as the actors do as they walk through animated doors- a comment, one wonders, of our distortion between what’s real and what isn’t when we view much of our world through the Twitter lens or mobile phone and bad art. And the self- reflexivity allows for our social comment and awareness. And we are invited to consider the double world of the stage the actors inhabit and the animated world that makes up their environment. The conceit begs the question- is the hand behind it all a benign one? In the case of Golem, and a lot of art and films and animations and some theatre we see, no. It is at best feeding into and intensifying all those forces that deny intelligent and compassionate evolution- violence, greed, lust, and competition. Golem’s only fault perhaps, is that Robert, who betrays himself, and who is the real victim, is at first rejected by the society within which he lives. It reasserts the idea that the unaccepted in society will eventually become its foes- although, of course, the inverse of this is to say that everyone must be accepted, and then humanity will have no foes.

The cast provide some detailed and precise physical theatre in complete tandem with innovative animation and, coupled with its unruly narrative,  explodes what’s possible in theatre- this is real cutting edge theatre responding to the needs of the times.

Directed and written by Suzanne Andrade