vibrant, like the play does to the actors, it hits you in the chest- a rom com with more for those who wish to see more

Supernatural elements lie at the heart of this nine vignette rom-com piece receiving its UK premiere after a successful Off-Broadway run about loves lost and found by the inhabitants of  a ‘never neverland’ place in Maine, New England, called Almost. ‘Almost’ because its inhabitants are disorganized and just- almost. 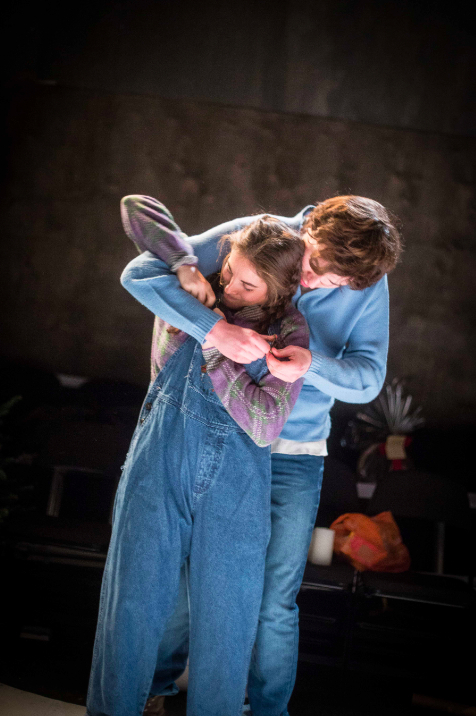 But almost cannot be said of the play or its actors, although it can be a running metaphor for the love stories it portrays- we run the gauntlet of all sorts of episodes- unspoken love, love which physically splinters a heart into 19 pieces and which a repair man promises to fix, unrequited love, love that’s so close it feels distant, asexual and homosexual love- the last case involving some crashing of legs to the floor.

Although seeming at first just a rom com, a rendition of not just [as popularly thought] Love Actually and Valentine’s Day but also drawing on Broke Back Mountain perhaps, there is a lot more to be seen in the actors’ expressions and slapstick humour which bounce off a pitch perfect script by actor playwright veteran John Cariani. What we are gunning for here are the moments of vulnerability, the incomprehension, insecurity and sheer disbelief sometimes when a character realizes he/ she cannot get what they want- the six cast members all give performances that have an in held intensity redolent of indie films like Winter’s Bone, Blue Valentine and Wendy and Lucy. We are in these worlds, with plenty of laughs and complimentary script devices- at the end of the play we realize that we haven’t quite after all been watching a series of vignettes, as we reach the denouement we realise we are at its beginning and that other journeys have been traveled as well as our own.

Despite being a rom com, despite inhabiting a made up world, the show can’t be accused of kitsch because it mocks it. The interesting set and lighting design from Amy Jane Cook and Kiaran Kesby is so blatant it had me thinking of Thomas Kinkade and his paintings of popular realistic, bucolic and idyllic subjects. He was, as he himself said a ‘painter of light’- and light is a pertinent theme in Almost, where the night skies are monumental, the landscape shredded of its of vegetation to make way for potato farms. And of course, we think about light penetrating that most mysterious of objects and subjects- the heart.

But all the time, we are reminded of artifice by director Simon Evans. Look closely at the back wall and to the right and you will see what I mean. Nor is any effort made to make us think we are seeing the night stars- we see they are just lights hanging from a lighting rig. Which makes us question how seriously are we meant to take all of this? Thoughtful writing, which reflects the oddities of love we all must recognize, can’t let us off the cheese hook entirely. Nor can the acting, which is lively and at times genius in its comedic moments. To make sense of this, look at the actors’ faces and you will see truth- albeit a little goofy- and then you will see the supernatural element- that this all takes place in a world which does not exist and then we wonder why this is so. But then, is that not love? It takes place in private worlds, in worlds where out of body experiences can occur, where the odd, the supernatural and the ‘almost’ can happen.

With a lot to say about love and its contradictions, mysteries and sheer banalities, Almost, Maine is vibrant, hitting you in the chest, so, like the cast, you might fall over. It is slap stick fun for a rom com audience and welcome warmth for winter but gives more for those wanting and willing to see more.