with some hypnotic and fluid acting, Jeff James and his team have produced an imaginative retelling of Sophocles' Philoctetes

Odysseus is a woman [Rosie Thomson] rather than a man and all three characters, Odysseus, Neoptolemus and Philoctetes, of Jeff James’ retelling of Sophocles’ Philoctetes, ‘Stink Foot’, are kitted out like heavy weight champions limbering up for a boxing bout. Security lamps surround the stage; Odysseus, a woman in a man’s world ‘these are the times and I am a woman for these times’ [The Iron Lady, anyone?] or I am ‘the most noble mother fucker’, prances round as if a boxing referee. We are at a boxing match, albeit on a far away island and in a set of bizarre circumstances- but boxing was prominent in the time of the Ancient Greeks and this 75 minute play has its action cut up into bouts where the characters verbally spar and attack and defend each other. 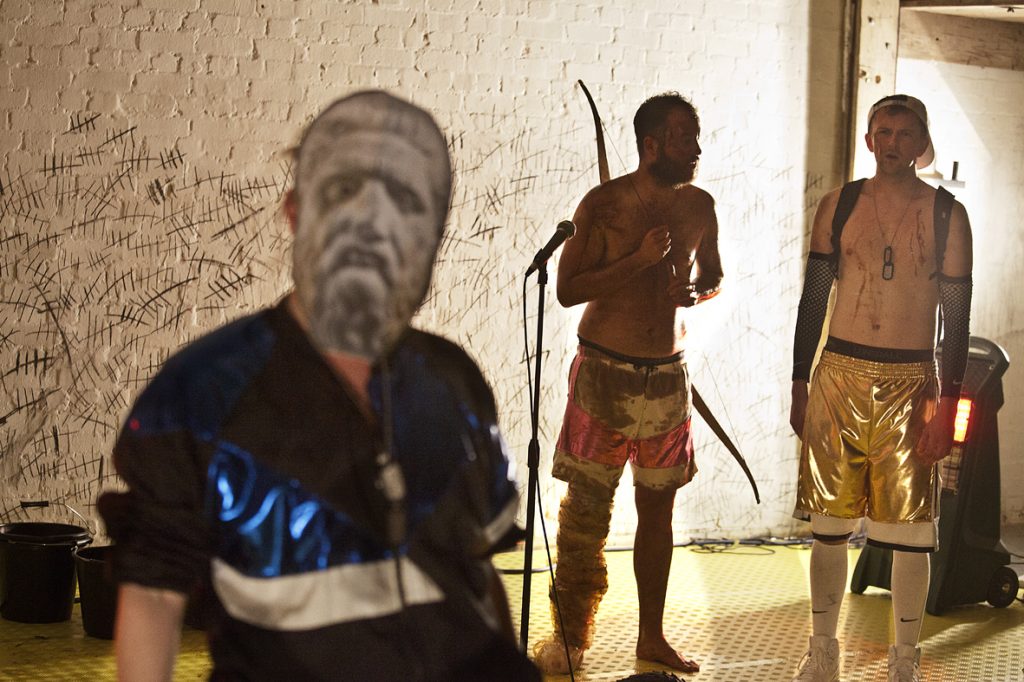 There have been many different interpretations of the Sophocles tragedy, Seamus Heaney’s The Cure at Troy, famously reflects the release of Nelson Mandela and the end of the Apartheid regime. Jeff James’ reworking is meant to ‘push what a Greek adaptation might be today’ and raise thematic concerns of ‘how can we be good in what feels like a big bad world?’ In fact, as in Sophocles’ version, Stink Foot is all about the right of the individual vs. the right of the group and what is right for that individual versus what is right for that group. Neoptolemus, son of Achilles and played by Joshua Miles, is persuaded by Odysseus that he must convince Philoctetes [Daniel Millar] whom Odysseus abandoned on the island when he was bitten by a snake and the foot became infected, to return with them again to Troy with his magic bow so they can win the Trojan war, as prophesized by Helenus, son of Priam. But it’s no easy task, Neoptolemus must lie about his allegiances towards Odysseus and the almost stoic Neo does not like lying or being dishonorable. As Odysseus lurks nearby and shouts instructions in his ear through the use of today’s modern technology [and with a comic twist, also controls the lighting and sound] Neo engages in verbal sparring not only with Philoctetes but also struggles with his own conscience.

Control and who is in control, or thinks they are, is a salient theme, considering the interplay between the text and Alex Lowde’s design. Odysseus thinks she is in control, hence her moving around of the lights, constantly re lighting Neo and Philoctetes so that their shadows loom large upon The Yard’s back wall- for the Greeks, shadows symbolised the psyche- although for Plato, shadows have to be renounced in order for true reality to be seen, something Odysseus is constantly trying to make Neo understand. Neo plays his part as the verbal warrior, who thinks that by admitting the truth and following his own nature, he can persuade Philoctetes to ‘choose to do the right thing’- he walks hesitantly on stage as if a puppet. But the most interesting stylistic device is the use of treacle as a visual symbol of Philoctetes’ stinking foot and the pus and blood. The original root meaning in Greek for the word treacle, thēriakē, was ‘poison antidote’- thus, not only do the creatives cleverly use the device to enable them to show us that Philoctetes is defined by his wound and stinking foot and which, because of its visual presence, becomes the overriding atmosphere of the play [recalling the famous jelly device used in Joe Hill- Gibbins’ The Changeling, Young Vic 2012] it also tells us that Philoctetes’ wound is also his saving grace and will save his life- as Neo constantly points out to him.

In Jeff James’ hands, this tragedy becomes a tragicomedy. All three actors deliver their lines as if ad libbing and recall a sense of kitchen sink drama with a postmodern twist. All 3 too, would not be out of place in a Shane Meadows film; indeed it feels like they have all just walked out of Twenty Four Seven.

There’s a lot to engage with in this retelling of Philoctetes and the actors are hypnotic and fluid in their roles – the expressionistic nature of the set design, whilst seeming at first almost too much, serves the play’s themes well and forms a unified entity.

Stink Foot plays at The Yard Theatre until 13th December

This show is presented by Jessica Campbell and DEM Productions.

Stink Foot is adapted and directed by Jeff James from Sophocles’ Philoctetes.