Children going to see Fevered Sleep’s latest interactive show for 4 – 7 year olds might never look at a ring fenced tree in the city in quite the same way after viewing the performance’s centre piece, a film where big It (Nasi Voutsas) treks through various rural landscapes trying to find his way back home after becoming separated from his friends during a trip to the forest. 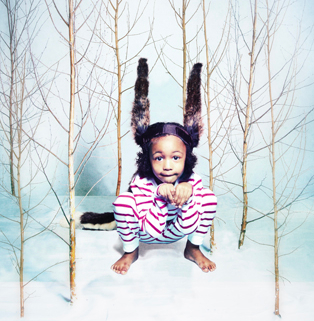 Given that today’s young children especially are so visually sophisticated,  the company cleverly merge film and theatre together through a simple onstage device, so that the world of the film and that of the children’s, doesn’t seem so far apart at all. To begin with, one feels one is experiencing a variation of a Brother’s Grimm tale or the Pied Piper of Hamlin. As the children enter a foyer area within the Maria, they are called ‘little its’ and asked to don tails before being encouraged by an engaging Nick Lawson to pass through the red door and into the main space- a sort of clearing in a forest which is an abstract reflection of the world they will experience on screen. Guided by what seems like an over sized puff ball, alternately glowing white and orange as if to signal a warning, they watch It as he experiences our countryside’s varied fauna and flora.

It’s true that one might wish there was slightly more audience interaction for the children- although they are encouraged, in keeping with It, to howl a lot, an activity I seem to remember being most enjoyable at that age or indeed at any age- and there are plenty of ideas for the children to take away with them. ‘It’ eats Dahlias and other such edible flowers and meets a Tawny Owl, caresses a Badger and holds his breath coming face to face with a Fox- but all mostly  in the city and not in the countryside as one might expect.

So, perhaps hidden in Fevered Sleep’s simple tale is a complex message- or several- about the human destruction and domestication of our rural areas which in turn forces the exodus of animals away from their natural habitats into the by-streets and parks of our cities- an exodus which we then try and control- hence the ring fenced tree on a street. But there are also other messages about freedom and individual paths to be trodden- at the play’s end the children are given twigs as though they are dowsing instruments, off to start their own particular journeys and treks through landscapes as yet unexplored.

It’s not just a performance for children though, it is entertaining for adults too and in this humdrum world, a welcome reminder that we should remember to replenish ourselves through the healing attributes of nature, where ever and when ever that can be found. As a country girl, its message could not be more pertinent for me even though I think  I know it all- and the use of film to express the healing qualities of nature, is the right one- the stillness of the camera and its ability to illustrate light moving through time, uniquely captures the meditative qualities and quietness that the countryside and the elements can bring.

Finally, one of the show’s greatest strengths is its soothing effect. The Maria is transformed into a warm cave like space, its usually hard floor is softly carpeted and those times when the lights are turned off and the children are allowed to contemplate what they have just seen and heard in silence with themselves, are some of the play’s most beautiful and memorable moments.