Chronically overweight? Can’t go to the toilet by yourself? Then Channel 4 esque fly on the wall documentary seeking to pay your gastric surgery operation Shocking Fat Stories wants to hear from you. 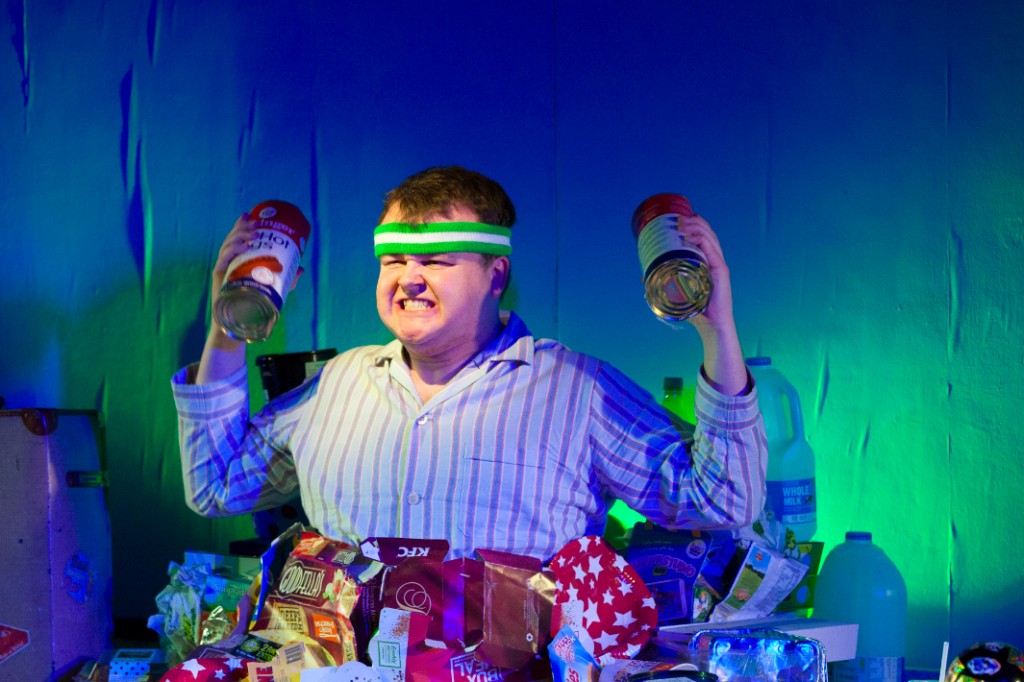 That’s the prevailing narrative theme of Beached by Melissa Bubnic and Marlowe Theatre’s first production directed energetically by Justin Audibert and just opening at Soho Theatre. James Dryden plays the hapless binge eating 19 year old Arty who has not left his room for three years and over eats because its his only chance of happiness and now, as a last gasp at rescuing his life and integrity, is the subject of Shocking Fat Stories, whose seemingly compassionate producer, played by Rhoda Ofori- Attah, masks a manipulative woman who relentlessly pursues and imposes her social agenda on Arty and his proud seemingly working class mother JoJo, humorously sketched out by Robin Weaver. Joined by Louise (Alison O’Donnell) from the job centre’s Pathways to Work Scheme and we look set for a heart felt liberal left comedy on the ruthlessness and incomprehension of far right Tory government officials and uncompassionate day time TV producers on the make.

But surprisingly Beached fails to follow those routes and instead gives us a lesson in the real attributes of love and perceptions of identity. Arty doesn’t care about his weight because in his head anything can happen- from eventful adventures with Pedro the action man in gangster Rio to just plain old visceral enjoyment of words like ‘intrepid’ and ‘epitome’. Arty has an imaginative inner life (rather let down in the play’s conclusion -or is it his saving grace? you decide) and it is instead those around him who live in a constant state of morbidity over his condition and disappointment that he is not who they want him to be. Yes, rather contradictorily, we have the clichés of a manipulative mother who keeps her son in a dependent state just so she can hold her life together and does her best to prevent him from having the crucial operation that will take him away from her. Yes we see a civil servant for whom Arty is just a statistic or an opportunity to gain points at the office. But despite some of the many curious oddly compelling crudities such as ‘can you reach your penis under your stomach in order to masturbate’ the true and rather singular message actually concerns the role of compassion- which Arty mistakenly believes is physical and ever lasting running off into the sunset romantic love. But his falling in love hides other messages within the play and serves to give him developmental journeys that makes his painful experiences all the more worthwhile. One thing to take away from this comedy is the true nature of love and compassion and the message that it can’t always be held onto, although its gifts can be everlasting.

Some good performances all round but especially from James Dryden whose witty, tongue in cheek and versatile performance wins over the audience almost instantaneously, Beached is a curious laugh- comedy with some serious undertones.