Questioning, brave, with outstanding performances from the graduates of East 15.

What does it feel like to be in a certain playhouse on a certain night and how can this be conveyed to people who might read about it 30 years hence? As I was searching for a new way in (each performance demands a different reaction from a ‘critic’ and asks for a new way of writing about it) to write about Axis Arts theatre festival for new emerging theatre companies at the White Bear, I found this quote by Kenneth Tynan, famous of course, but until now unknown to me, and decided to try and follow it. 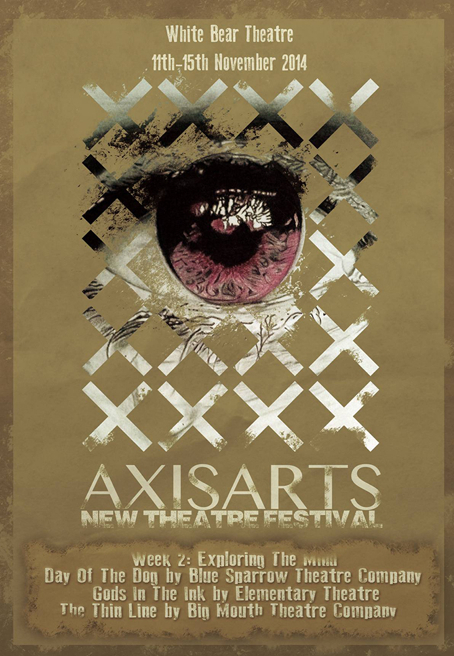 Because it feels appropriate to use this method to convey the multitude of ideas expressed by the varying three plays I saw last night as an over all impression of the breadth of theme, drama, style.

Gods in the Ink (Elementary Theatre) is a short look on what happens to two young miners trapped in a shaft after an explosion rips through the rocks. One would expect it to be a tale of survival but it’s not. Or rather it is but that’s just a starting point for a discussion about the Ubermensch- Over human, Above-Human or in layman’s terms and here, referring to popular culture appropriating Nietzsche’s idea, Superman. The beauty of the piece, which has no real plot, development, climax or denouement, is that we can see where it is coming from- one automatically starts thinking of Beckett. It’s an effective essay on how our belief in the Ubermensch has become a belief in the superhero (just look at the current films coming out of Hollywood) and has become the answer, for these men at least, to a Godless universe where your boss leaves you to perish underground, rather than spend money to rescue you. But there is a visual paradox too. The two men are pushed into the corner, trapped by rubble. We understand the claustrophobia the men endure (and anyone who has spent amounts of time underground in mines or caves will understand the heat from the earth’s bowels) which is physical, psychological and spiritual. And yet they are also in a sea of darkness that is the rest of the black stage, a metaphor for the unknowable universe that cannot be reasoned out through argument or logic nor a belief in super heroes. The ink is the page, the superhero comic strip, but it is also God and the unquantifiable vacuum.

Day of the Dog (Blue Sparrow Theatre) makes depression real in a short drama about how a teenager’s depression impacts on her and her family. Its naturalism is a relief after the hyper real of the piece before, but also because it is a depiction of an ordinary family in a plausible situation. It does not explore depression in the abstract but focuses on the philosophic problems of depression in a social and psychological existence. Polly is impotent, unable to function, her younger sister Harriet, sucks up her energy, the mother admits her incomprehensibility and inability to cope. Somehow the three come together through dramatic plot. Polly has to breakdown, in front of others [this is essential] and gets it all out of her. In other words ‘shines’ like Loomis at the end of Joe Turner’s Come and Gone (August Wilson).

The Thin Line (Big Mouth Theatre) coming last seems to run through the gamut of theatrical styles, itself a metaphor for the play’s thematic concern- trying to understand what makes us human, trying to understand our human identities and paradoxes. Its main narrative theme is the emotive issue of pedophilia- George is a school teacher about to introduce his class to Romeo and Juliet and in a meta theatre parallel, unwittingly becomes ensnared in an online relationship with a woman who turns out to be his 14 year old Grade A student. We are currently living in times racked by convulsive anxiety and guilt about child abuse cases stemming from the 1980s and an academic backlash where there are attempts to push the acceptability of child sex. As recent as yesterday The Telegraph ran an article about Internet grooming and the vigilantes hunting down pedophiles. But is George a pedophile? And when, if at all, does thought become a crime? (a crime is only a crime to an individual, whether thought or action, if it goes against his own heart). Using what seems like verbatim tape recordings that top and tail the piece, there is an attempt to dissect what a human being is- ‘they are not born a rapist, a liar’ etc- the all too humanness of George is that disdain for him gets us nowhere- he is not deliberately doing bad, not deliberately a sex offender. But he is transgressive, he is blasphemous and yet, ‘giving expression to his essence’- and that essence appears to be falling in love, online, with an underage girl. Unexpectedly the play ends with symbolic salvation. We don’t exactly, or may not dare to think how- the play’s cleverness is that it allows the audience to interject their own private wish fulfillment- and thereby question themselves and perhaps realize that there are many selves residing in the one individual self.

Questioning, brave, with outstanding performances from the graduates of East 15.

This strand of plays runs until Saturday at the White Bear, Kennington, a new program will begin Tuesday 18th November and concludes 22 November.

Gods in the Ink:

The Day of The Dog: