Review of: The Hundred We Are

Hobo Theatre’s aim is to produce work in unconventional spaces ‘telling stories with an international perspective about wanderers, adventurers and people lost on the margins’ and its newest production of Swedish playwright Jonas Hassen Khemiri’s The Hundred We Are, receiving its UK premiere at the Yard Theatre, a fitting backdrop for the play’s illusionary precariousness, does not disappoint. 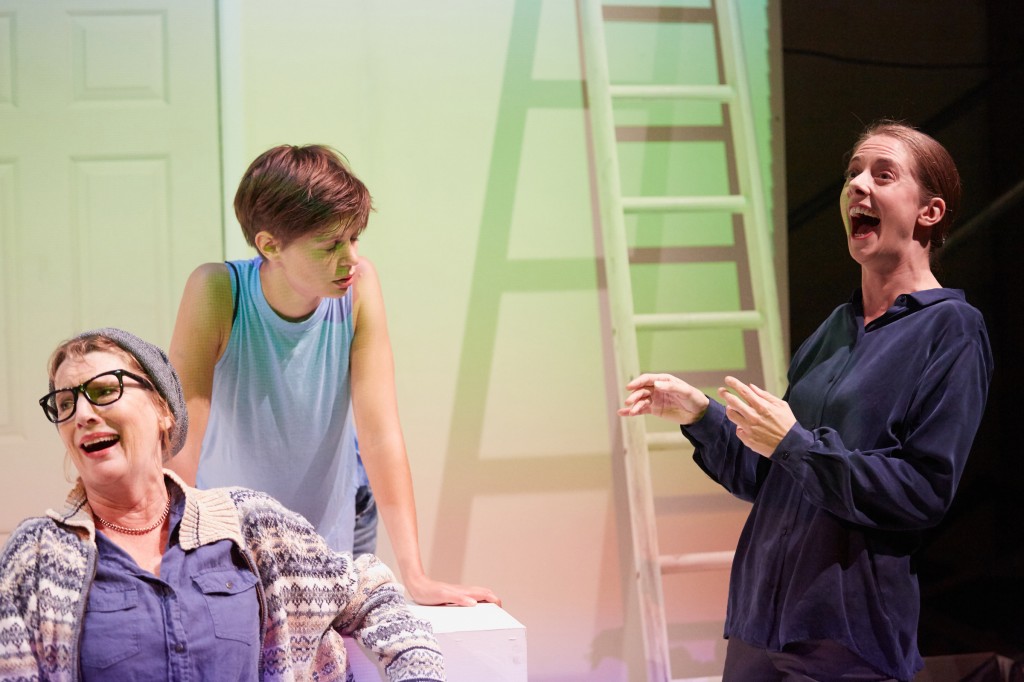 Receiving a worldwide premiere in Gothenburg in 2009, the play follows the lives of three seemingly individual women – or as named in the program, 1, 2 & 3. 1, a feisty young what we may recognise as a shadow of a Laurie Penny type （Ida Bonnast）is a mad ‘intellectual’ revolutionary, 2 （Katherine Manners）a comfort stability seeking would be mumsie and 3 （Karen Archer）a woman on the brink of old age and whose pertinent line ‘forget how to sit, that’s all we have to do’ underlines the seriousness of the work, despite its initial surface shine which has role play and dressing up as its main dramatic thrust.

Soon it becomes clear that all is not clear and we start to understand that 1, 2 & 3 could actually be all the same person- a fractured ‘we’ whose schizophrenia, possible visions and fantasies are brought into birth by the madness caused when our personal worlds collide with the more and increasingly violent global spheres. Watch out for the hilarious Preventative Dentistry convention which brilliantly explores this collision. But there are some more serious themes to consider too. Jonas Hassen Khemiri’s tendency towards a little hyper line （reminding me of Arne Lygre’s Then Silence I saw at UAL some months ago）pushes the role play whilst simultaneously exposing the myths and hyperbolic stories the 3 characters invent about themselves- and in this production ‘them’ also means ‘us’ and ‘we’- Jamie Harper’s nice use of meta theatre, where 1 comes into the audience to direct a fantasy or a memory that 2 is experiencing, does not let us forget this.
Florence McHugh’s clever stage design, looking like a cross between a bad Ikea kit and a set from a children’s TV show, reiterates the sense of fantasy, although throughout I found myself thinking of Wim Wenders’ Wings of Desire, perhaps not far from something, as that film was an inspiring influence on a recent Hobo production, Heaven in Berlin. But what’s really interesting is the use of video imagery. Are the women, are we, merely 72 dpi on a huge computer screen somewhere? Has the computer screen replaced God? But the video imagery also makes real 1’s preoccupations with wars, where ‘dimples become grenade craters’ – so real in fact, it’s almost like a 4th character. In some ways the global issues or, to be more precise, the images of them, are more real than the characters themselves- our obsession with needing to know and experience every death （the reality of which only cinema could once provide）has driven away any internal cohesion and is instead responsible for the ‘golden framed memories’ to which 1, 2 & 3 cling but which are also sacrificed on the women’s winding stairwell to heaven as it continues its reach towards a painful truth.

By turns comical, urgent and full of pain, The Hundred We Are continues at The Yard Theatre until 8 November, to book, click here