Simon Lipkin as Touchstone has the audience almost laughing in the aisles- especially with his great ad libbing.

Derek Bond’s new production of As You Like It consists of a merry cluster of actor/ musicians who prove themselves as happy and as proficient at grabbing a cello or sitting down at a piano as they are acting the Bard’s funniest characters, or, as Touchstone so brilliantly proves in what must be the show’s most hilarious invention, handling and controlling Audrey the puppet,  in the play, Touchstone’s lover. 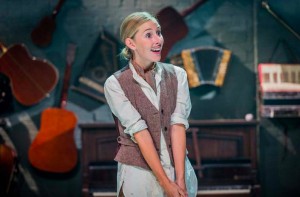 The production is not quite the full text but one feels it is all the more streamlined and pacer for it, although I did miss some of the more ambiguous and more complicated moments between Orlando and Rosalind that have been present in other more text faithful productions.  For those who don’t know, Duke Frederick has banished his brother to the forest of Arden, soon to be joined by Rosalind his daughter and her cousin Ceila, who runs away and follows to keep her sister- in- arms company. Brothers Oliver and Orlando fight over their inheritance as concurrently Orlando falls in love with Rosalind and she him. Once Orlando too is banished to Arden, where all shall live like Robin Hood’s men, Rosalind, now dressed as the young man Ganymede and searching for her father, sets about trying to counsel Orlando over his love for her as, unsuspecting of this gender reversal, he mistakes her for a youth. Subplots to give counter notions of more crude versions of love run amuck around them, including the now more bestial version of Touchstone and the puppet.

There’s some superb acting from Sally Scott as Rosalind who seems to be in her element, and she is nicely complimented by Harry Livingstone as Orlando- between them there is some believable onstage chemistry.  The company double up to play various different characters and Steven Crossley gives a great performance as the two dukes and Simon Lipkin as Touchstone has the audience almost laughing in the aisles- especially with his great ad libbing.

Although I would say that there is less emphasis on gender ambiguity and it loses some of its complication because of it and I missed a sharper contrast between the melancholy Jacques and everyone else [ although that famous speech still almost stole the show], it is made up for by the exuberant acting from this multi talented ensemble- and there is some welcome audience participation and beautiful set design from Emma Bailey. With the folk like music much light work is made of this pastoral comedy now musical, which is perhaps as it should be.

As You Like It plays until 18th October,  book here