Review of: These are your lives

Geste Records, their performers and six chorus members are to be congratulated for a carefully controlled and detailed piece

‘It’s a different experience, it flows in a different way’ a character proclaims ¾ of the way through These Are Your Lives, a dance, physical theatre and performance piece which offers not just a deconstruction of the- it must be said- imagined world of a celebrity- but of one celebrity in particular, film star Tom Cruise. 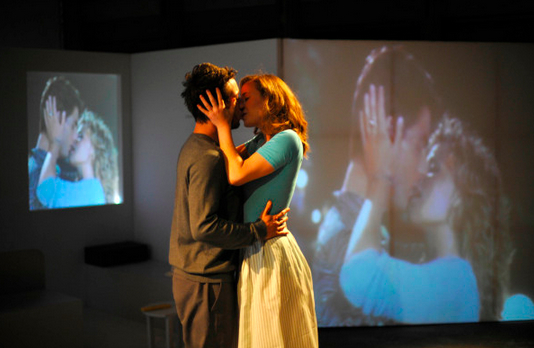 Verbatim scripts, sound bites, interviews in hotel rooms and excerpts from his most well known films, are chopped up, mish-mashed together, replayed rewound and replicated by the main actor Jack Johns, who plays himself playing Cruise as he totters from chat show to chat show, with the exaggerated air of a man continually on the fake. At one point Cruise is accused of smiling too much and he answers- with a smile. On an ordinary level what’s wrong with that? Most folk barely smile.. but as this is the world of celebritism it has to be assumed that it is fake, and more so in Cruise’ case, because, as we are led to believe, he can’t resist the draw and pain of the spotlight.

It’s a clever, if repetitive look at the nature of truth. Every tilt of the head, point of the finger, spreading of the legs, is carefully replicated, mocked and shown as false [we are all body language readers in this day and age- but perhaps we are all so busy looking for disingenuousness that we often miss authenticity]. And we are made to believe that there might be more spontaneity in the actors’ attempts to mirror scenes from Cruise’s films, than in Cruise’s own carefully choreographed interview appearances.

But the piece raises an important question surrounding complicity. I found myself objecting to the almost clichéd portrayal of the public man in his more private moments- it can only have validity if it is a comment on how the media and the public wish to perceive a celebrity [vacuous, hollow we are led to believe] due to a lack of imagination and perhaps unconscious revenge for what we imagine to be a lavish life style [depending on your value system] and how complicit we are in that false belief, which then for the believers, becomes the perceived reality, whether it is or not. And many other hinted at complex meanings are lost in long drawn out movement sequences that only seem a repetition of scenes before- for example, the interplay between the fantasy of the films’ narratives and the actor’s real life. However Geste Records, their performers and six chorus members are to be congratulated for a carefully controlled and detailed piece.

Comparisons with the surreal world of David Lynch have already been made but I’d like to mention Be Kind, Rewind.. not least because I felt I’d like the piece to be a little bit kinder towards its main subject- after all, we make the truth. It is also not totally clear how much ‘inside the picture’ or this complicit world we all are. The assumption is that with fame comes a destruction of a person’s individuality and the rampant personal pain that comes with that, based on the persona Tom Cruise may or may not project in public. Stripped down, this is really about what it means to be an authentic individual who has the courage- or not- to share his own light and truth with the world. But how truthfully the world is able to perceive that individual will be dictated by its particular spiritual perceptions of the time.

It certainly is ‘a different experience’ but I am not sure about any truthfulness it can bear to any inner experience Tom Cruise has of his life. It is about agony and artifice but even in these things, there’s the truth of the man to be found somewhere. Perhaps this is the point.