Review of: The Edge of Our Bodies

The almost dissolution of the 4th wall in Adam Rapp’s The Edge of Our Bodies, directed by the Gate’s Artistic Director Christopher Haydon, asks the audience to wonder whether everything Bernie [Shannon Tarbet] reads to us from her journal is true, in this the first of a trilogy of plays in the Gate’s ‘Who does she think she is?’ season. 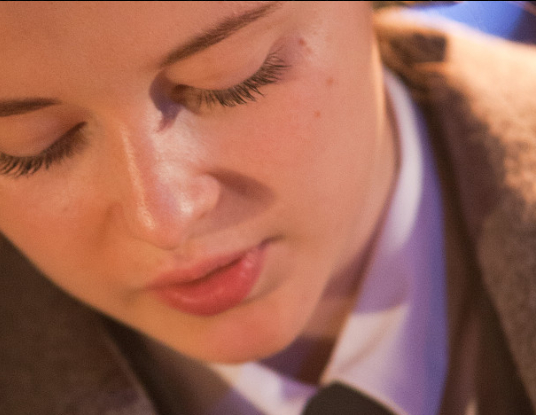 16 year old Tony prep school student Bernie or Bernadette, sitting on a stool and narrating from her diary, is en route to New York in a bid to inform her boyfriend Michael that she’s in the first stage of her pregnancy. Along the way she meets an assortment of colorful characters mindful of J D Salinger’s Catcher in the Rye, early Bukowski works and the beginning of Ang Lee’s The Ice Storm. But this is a play about fantasy and the imagination- Bernie’s desire to be one of the maids in Genet’s play of the same name in her school production, adds weight to that idea and the mysterious set design by Lily Arnold- are we in a hall full of mirrors, a school room or Bernie’s mind? [Alice Through the Looking Glass?]- further asks the audience to wonder at the truth of Bernie’s words- after all, we learn she wishes to be a short story writer and what she reads from her journal is as good as anything by Jean Stafford or Carson McCullers.

The play within the play affect serves as a reminder that art- and Bernie’s own art- can serve as a helpful cathartic tool. It could be that Bernie, not quite able or too afraid to get what she wants, uses writing as an aid and a ceremony in order to make that transition from childhood to adulthood, just as the maids in Genet’s play, based on the murderous Papin sisters in Le Mans, use ritual and role play in order to prevent them from actually carrying out their murderous desires.

Every word that Bernie utters is at the edge of her body- at the edge of reality- just like Michael’s dad’s experience of his illness, after which the play is named. Another name for it is Astral Projection, a theme I thought pertinent to another recent Gate production, Grounded. We astral project when we simply can’t be present anymore, or when we need to give the body, heart and mind a break. Art is also another name for that, as is Bernie’s journal.

One conclusion is that Bernie’s journey to New York is imaginary, giving her the release she needs to take the action she does at the end of the play. It’s only then, in the play’s few final scenes do we find truth.

Shannon Tarbet as Bernadette is almost regal in her command of the stage and us. She holds our attention in her almost constant measured and nuanced 75 minute monologue, which is comically interrupted by a maintenance man [Trevor Michael Georges]. As he sweeps up the mess on the stage is he clearing something real or Bernie’s mind?

The last, most beautiful and unexpected scene, may provide the answer.

Entirely mysterious and phantasmorgically haunting, The Edge of Our Bodies continues at the Gate Theatre until 18th October.