Review of: Price of Money

It is impossible to witness their shows and remain impassive or passive, especially as the company is as active offstage as they are on it- their recent Red Forest Campaign can bear testament to that.

Drawing from Tom Stoppard’s Rosencrantz and Guildenstern are Dead, Belarus Free Theatre’s new show, Price of Money, opens with two men in penguin suits who are so bored the only entertainment they can find is to toss a coin. As in Stoppard’s version, it’s heads every time and we are encouraged to think that the supernatural forces responsible for this, outwitting the law of probability, might be a convenient explanation for those who don’t want feel accountable for the rampant damage caused by capitalism, capitalist greed [and just greed] and totalitarian states. The quid is also a metaphor for the play’s other themes, wealth and poverty being two sides of the same coin. 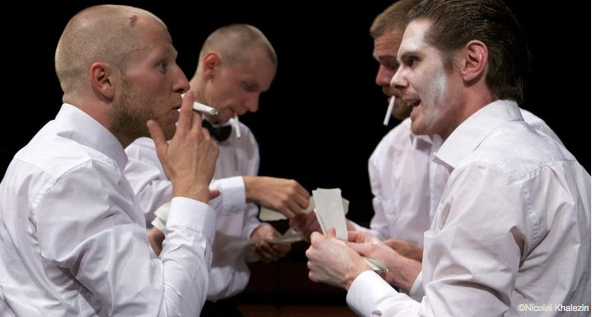 Drawing on Aristophanes’ Plutus [where an Athenian believes that by restoring the God of Wealth’s vision riches will be properly and fairly redistributed, wiping out poverty] the show also explores true global financial stories that orbit around Chremylos and Plutus like satellites in a state of interdependence. Amongst them, we meet Christopher Foster, a UK businessman who killed his family, his horses and then himself, rather than face a ‘degrading’ change in life style, a young girl whose manner of living is funded by the rent given to her family by a brothel but about which she must never talk, a dominatrix who would rather believe the illusion that her young lover really loves her, rather than the truth – that he is more interested in her money. There are other stories, examining human greed and reticence.  Later an actor playing Stephane Hessel appears and, as in his book Time for Outrage, urges the audience into indignation, especially over the ruinous effects of money and how it motivates what we put value to. In fact the whole show is about value rather than money itself, which after all, is merely a vehicle. From the star system in theatre criticism to the caviar eating Pasha, everyone wants more.

In Stoppard’s Rosencrantz and Guildenstern, the subject of reality is mused upon and it is commented how an event becomes increasingly real as more people witness it. The theatre company’s shows themselves are always events and as an audience member, and having seen most of their work, I always feel I am bearing witness to a concerted effort and desire for change and to make this dream a reality. It is impossible to witness their shows and remain impassive or passive, especially as the company is as active offstage as they are on it- their recent Red Forest Campaign can bear testament to that. Living and working as they now do, mostly in the UK, they also adhere to a working method that allows the actor to shape the themes and stories of the work, bringing an energy and realness and urgency that other productions, as justified as they need to be by defining an outcome before acquiring funding, can never quite achieve. Achieving creative truth and educating audiences seems more important to BFT than a big budget, but it does not stop them from creating innovative work- or for continually pressing for change. They are as true to their activism as Alexandre, a Brazilian fisherman, whose words are quoted in the fortune cookies BFT left on the seats of every audience member- ‘I didn’t choose to be in this situation. I found myself in it. We can’t keep quiet’. Nor can Belarus Free Theatre and let’s hope they continue to protest and activate change in safety both here in the UK and in their home country, Belarus.

Price of Money has now finished its run at The Albany but it is the beginning of a three-year relationship with the theatre and the community of Deptford.

to find out more

Price of Money was devised by Belarus Free Theatre