Review of: My Perfect Mind

My Perfect Mind, just opening at the Young Vic is an essay upon the nature of truth and reality [the battle between magic and reality both in our minds and the theatre] illusion and hyper reality and plays around with notions of identity expectations. 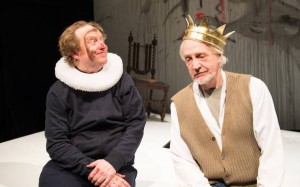 It’s based on Edward Petherbridge’s real life history [here playing himself]and charts the actor’s 2007 journey to New Zealand to fulfill his lifelong ambition to play King Lear, only to suffer a paralyzing stroke two days into rehearsal. What follows is a series of dramatic and comedic associative events as Edward Petherbridge, metamorphosing into Lear and back again and supported by a dynamic Paul Hunter playing a series of fall guy characters from a German Psychiatrist to a Romanian Shakespeare academic, zips back and forth in time and particularly so, to the moment when his mother, just two days before his own birth, suffered a similar crippling stroke in Yorkshire.

What is our experiential truth and how does that manifest itself in contrast with an objective [if any, as we can only perceive according to our level of consciousness] perception of reality? At one point Edward Petherbridge tries to answer, relating how, in a play at the National Theatre, he was suddenly aware that out there, beyond the confines of the auditorium, were courts and hospitals and the Houses of Parliament- real lawyers, real doctors but yet, the realness for him- the supposed hyper reality of the imaginary world he was in- contained the real stillness and the real truth. The issue of identity and the expectations that go with that is also raised. At first Paul Hunter’s psychiatrist claims the actor is suffering from King Lear Syndrome- someone who believes he is Lear. But later it turns out he has Edward Petherbridge syndrome instead. A comment on the ego perhaps, its expectations of itself and desperate need to create sense and meaning? A rejection or discarding of one identity in favor of another when it feels appropriate? Who is who? 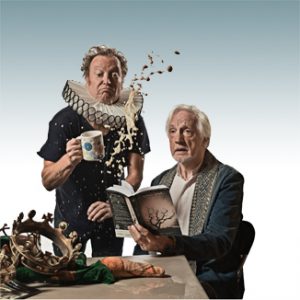 ther reviews have suggested that the Edward Petherbridge/ King Lear/ Fool dynamic in this 90-minute comic two hander wonderfully directed by Kathryn Hunter, is a comment on the universal foolish man who would be king but it’s even simpler than that, as it suggests that the king and the fool reside alongside each other in us all. As My Perfect Mind wonderfully exemplifies then [the trick being the mind is perfect simply because it isn’t], the nature of one’s own reality [and hyper reality] and truth, depends on individual perceptions of and reactions to external events and therefore determines which character one decides to be- the self, the king, the fool or all three.

Edward Petherbridge gets his magic in the end and is King Lear but it’s a magic fashioned and derived from the detritus of a tragic event that could have turned out differently if other perceptions and choices were made. The play’s a great teacher and has some wonderful comic moments and is a nice complement to the Young Vic’s main house show, A Streetcar Named Desire, where the longing for a different kind of magic hyper reality has disastrous consequences.

My Perfect Mind runs until 27 September at the Young Vic

A Told by an Idiot, Young Vic and Theatre Royal Plymouth co-production

Created by Told by an Idiot