Unrepentantly cruel and yet with redemptive youth on its side

It’s strange and perhaps also rather wonderful, how at 16, one’s perceptions of the world and one’s concerns can change so radically and be expressed so differently that one hardly recognizes the emerging adult forming out of the rather imperfect chrysalis that forms childhood. This seems to be the case with Chicken Shop by Anna Jordan, a coming of age story laden with many cruelties. 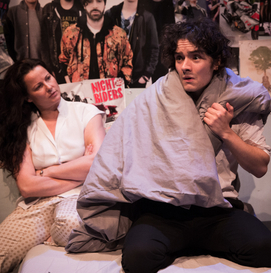 This change, or opening of the eyes, is something that the play, director Jemma Gross and the playwright successfully achieve- Hendrix [Jesse Rutherford], living with his mother Hilary [Angela Bull] and her new Australian girl friend Katie [Millie Reeves] complains about the food he has to eat as a way of protesting against the new lover, her and Hilary’s parenting skills and the bullying he suffers at school [which is also their fault]- in a way that is fitting of a petulant school boy.  At the play’s end, his concerns, which have grown to include the safety of prostitute Luminita [LucyRosyln] who is entrapped by her vicious pimp Leko [John Last], are given a more adult voice through a desire help her- and when that is finally thwarted, more desperate form through a show of violence, where we see shadows of the child Hendrix unable to comprehend the world he has now entered as an adult.

The 2 hour play tackles many themes as Hendrix stumbles into a brothel above a chicken shop in order to escape his humdrum life- young masculinity in a world full of women [the only men, apart from Hendrix, are very bad- even Hilary’s ex lover, Meg, a biker, becomes a man for Hendrix in an effort to counterbalance this] parental issues and same sex parenting and sexual exploitation. But it’s also about betrayal- and Hendrix, who seems to think that everyone is betraying him, suddenly finds himself also an accidental betrayer- it’s as though this is what really makes him adult. ‘You let me down’ he screams at his mum, when what he really means is that he let Luminita down by failing to save her from the evil clutches of Leko. Although we go into most situations with the best of intentions, sometimes life just doesn’t work that way and we find ourselves compromised unpredictably by the actions and circumstances of others- and at those times we can never tell how we may react- something that is a big theme in the play, from Luminita making the mistake of her life by trusting the man who betrayed her and so losing all her vitality and fight [she is ‘empty’ Leko tells her] to Hendrix who, without thinking and as a reaction to Luminita’s forced making love to him, turns his back and runs away from her, with life changing consequences.

There are some brilliant performances all round from the cast, especially when one feels that sometimes the writing mechanics of the piece are not always there- the lead up to Hendrix’s sudden visit to the brothel is not as justified in the playwriting as much as it could be and therefore seems a bit sudden and out of character for a boy of Hendrix’s sensitivity. However there are some stand out scenes between Lucy Rosalyn and Jesse Rutherford, who, in just about every scene in the play, accurately captures the painful and awakening journey Hendrix must make from being boy to man. Will Hendrix be able to protect his good heart and natural sense of empathy in the play’s last few scenes or have his experiences embittered him forever and hardened his heart? That question remains unanswered.

Unrepentantly  cruel and yet with redemptive youth on its side, Chicken Shop continues until 28th Sept book here for tickets