Review of: The Not So Curious Incident of the Man in the Green Volvo

The characters know they are talking nonsense half the time but its the actors ability to go with the material and embrace their ridiculousness and outlandish fantasies with a half cocked DIY expression that makes this all the more enjoyable.

Role-play is at the heart of this hilarious Camden Fringe piece that completes its run Saturday 16th Aug at the Lord Stanley.

The play is made up of characters you’ll recognize- it seems the natural child of the daftness of the Mighty Boosh or Two Pints of Lager and a Packet of Crisps. Like Ricky Gervais’ Derek, it merges social realism with a hefty whack of comedy and cultural commentary in outrageous ways… look out for the hilarious male stereotypical anecdote about Kylie Minogue and Britney Spears, surely inverted feminism and an ardent attack on how modern men continually fantasize about women. 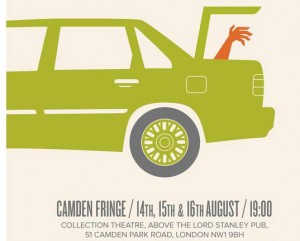 But it knows its own shtick. The story of two brothers, one of whom accidentally runs over a man and kills him, and their friends and how they will get rid of the body, is the focus of the narrative for the play’s one hour and 15 minutes. We are continually reminded of the body by its inanimate presence in the sitting room in which the action takes place. Both Stevie [Sam Weston] and Rich [ Ashley Pekri], the brothers, are unable to decide what to do with the body. They are joined by two female friends [ Samantha J McDonald & Kate Robinson who are also the writers & directors] out from a fancy dress party, who are equally unsure until one of them has a brain wave. Later a policeman [Daniel Ward Nixon] stumbles in on the group and the farce is complete, with a fitting and twisted end.

I was thinking of the dark biting humor in Danny Boyle’s Shallow Grave whilst watching this and also, of the two brothers, of a Paul Merton on crack [Stevie] and a slightly mellowed David Thewlis [Rich] in Mike Leigh’s Naked.

I say that role-play is at the heart of this comedy as it never seems we ever get close to the real characters. Each seems to be playing a parody of themselves but this is fitting in a society where it seems that parody is the in thing. I know of real characters like Stevie, who can’t seem to say anything unless it is quoting a song or dancing a dance, I know of characters like Candice and Tiff, who require a  audience in order to constantly self reference themselves- both Tiff and Candice flirt outrageously with the audience- at times the comedy even becomes meta theatre- and one realizes one is kept at a distance from knowing who they really are. I work with people like this and they are brilliantly recognized as a modern day phenomenon.

It’s good fun- one of the female’s seems to have an obsession with cucumber and I instantly thought of the governess in Chekhov’s The Cherry Orchard- and is having a laugh at itself as well as the world we currently live in- the material feels alive and fresh. The characters know they are talking nonsense half the time but it’s the actors ability to go with the material and embrace their ridiculousness and outlandish fantasies with a half cocked DIY expression that makes this all the more enjoyable.