for me their ‘associative thinking’ style approach, rejecting the traditional norms of a linear narrative with an absolute message, is a freeing experience and part of what draws me to their work

Some of the criticism levelled at Belarus Free Theatre’s latest show merry christmas, Ms Meadows, is that the play seems confused in its message over its two chief thematic concerns- gender identity and sexual orientation. But for me their ‘associative thinking’ style approach, rejecting the traditional norms of a linear narrative with an absolute message, is a freeing experience and part of what draws me to their work- one senses that the company is continually trying to look for meaningful relationships of grouped phenomena between acts and events [and inviting the audience to do so too]- hence their particular brand of documentary didactic theatre combining an unusual amount of research, verbatim theatre, news/ interviews & theorists [here it is Michel Foucault and The History of Sexuality] in typical conflict and contrast with the warmth, passion and ardency of their physical theatre which often includes live music and visual potency. 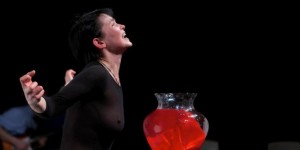 In fact, in this case, the poetical almost binary opposites stylistic approach which has so discomforted some critics, is surely [one way of looking at it] a metaphor in itself- the uncomfortable extremes of thought and feeling produced in us by the constant interrupting by newspaper reports and scholarly intellectualisms is a discomfort some have expressed they would rather not enjoy, preferring instead to stay with the humanness of the characters the actors so magically bring to life. Thus the gulf between media reports, their claim to being able to have a moral ethical stand point which speaks for everyone and to drive in us some emotional charge and judgment, particularly in the case of Ms Meadows, is cleverly exposed for what it is in this piece- inhuman, unconscionable, uncomfortable but insatiable.

The play begins with the suicide of teacher Lucy Meadows who was outed and horrifically attacked by the press for her gender reassignment and intertwines her story with global transphobia narratives, stories from countries where the third sex is accepted and at least acknowledged [the hijra community] and Albania’s Last Sworn Virgins- women, who in order to escape arranged marriages and lives of domestic servitude, elect to become men [forgoing sex as a condition] and for whom behaving like men, though not necessarily feeling like them [or a man], is a political and social act. BFT documents several examples to show us women who still prefer to think of themselves as such and others who have, without gender reassignment, become and feel like men.

The message though, ultimately, is that ‘we don’t need bodies [or a body] to love’ we don’t need to have sexual identity, that the purest of love might just be platonic. It might be so a simple message that it seems odd that it has to be stated. But it is one that does not seem to permeate even those cultures that consider themselves democratic and sophisticated. And we are forced to question why it is that now, more than ever, society insists on tying people to their sexual orientation or gender assignment and expectations and that the deviation from those considered ‘norms’ is not acceptable? What does it say about us? What is it we fear? Do we fear having to relate to someone as being and a being, rather than someone we can experience as an exterior form only and whom we can all place, identify with and understand- or not, as the case may be?

merry christmas, Ms Meadows is an important discourse on how our sexual orientation and gender assignment dictates society’s treatment of us- depending on where that society is and the religions and politics that shape and inform it. And it does important work to raise awareness about these issues- work that Lucy Meadows wanted to dedicate herself to but who never got the chance to ‘educate the people around me and the children at school’ as she had wished.