Cool, calculated, perplexing and with some fine directing by Abigail Pickard Price

In a final twist at the end of Mike Cullen’s play it becomes clear whose memory we are to really believe. Or does it? 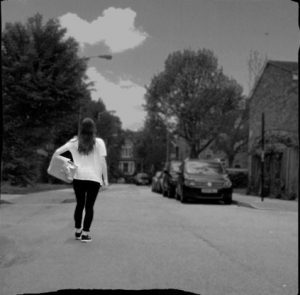 Mike Cullen believes that the function of theatre is to ‘generate debate rather than dictate a viewpoint’ and KiteHigh’s new production of Anna Weiss, directed by Abigail Pickard Price, certainly achieves this. The play itself dips and dives, slipping frustratingly out of your hands just when you think you’ve got it sussed. At its core lies fierce ambiguity and revelation. Lynn [Chloe Walshe] is hypnotherapist Anna Weiss’ [Sandra Paternostro] young patient, with whom she also lives. The play takes place on the eve the two are to move to a new town and the pair are meant to be celebrating. However, there’s a problem- Anna’s hypnosis has uncovered Lynn’s repressed memories of child molestation carried out by her father and tonight’s the night she will confront him. When the father David [Charlie Haskins] finally arrives what unfolds is an almost anti—theory polemic discourse as Lynn tries to assert her own [learned?] truth as much as David at first denies it but then relents, though not for the reasons you might expect.

The epiphany that happens at the end of the play poses questions surely about collective memory and its dangerous associations. The question here is whether it is collective memory that is in full operation or is there a darker and more subconscious force at work between Anna and Lynn? Whatever the conclusion, the play raises uncomfortable questions about the nature of therapy and of hypnotherapy in particular, which in this country, is still unregulated.

The set’s sparsity, populated only by cardboard boxes, is a metaphor obviously for those repressed memories or memories that others implant or rearrange in order to serve their own needs- for anyone watching the meaning of this will become clear. Sandra Paternostro’s breakdown and clear sightedness is worthy of any in an August Wilson play and Chloe Walshe is effective as the confused young woman who thinks she knows and still thinks she knows in the drama’s last act. And hats off to Charlie Haskins who stepped in to play David at the last moment- a beautifully detailed and restrained performance that leaves the audience divided over his innocence.

Cool, calculated, perplexing and with some fine directing by Abigail Pickard Price, the play skewers your thoughts- is this false memory syndrome or collective memory gone wrong? The answer lies with you.

Anna Weiss continues at The Space until 13th September