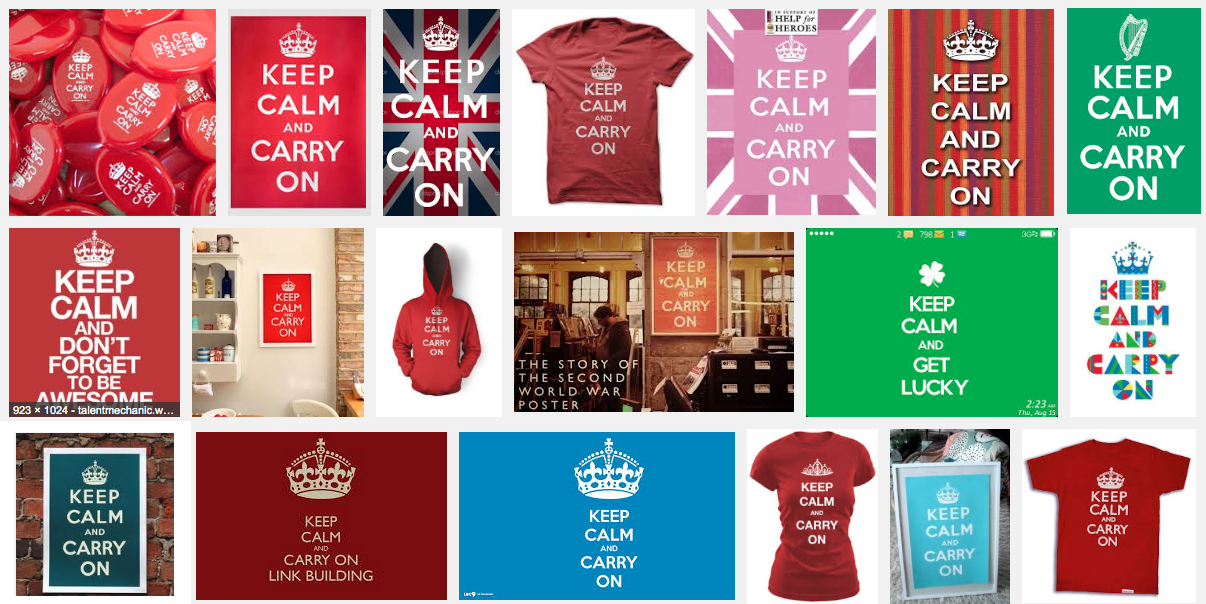 In the past month I’ve been doing a bit of travelling to see international theatre – first fairly close to home in Ireland, then a little further a field in Argentina. At first I was surprised to see the Keep Calm and Carry On meme had taken over Ireland so completely – but considering our shared language, heritage and proximity I guess it’s not that much of a surprise. It was far more surprising to see that it’s made its way over the Atlantic and language barrier to Argentina. What is it about this piece of war time kitsch that has made it such a resonant meme around the world?

Adorning everything from mugs to t-shirts, posters to dishcloths – “Keep Calm and Carry On” has become an unofficial slogan of our time. Perhaps this should not be a surprise, sitting as we do in the uneasy space after the crash of 2008 which saw the near collapse of international free market capitalism. Our quality of life sill impacted daily as we are asked to pay the price for the failures of the wealthy – who seem the only people asked not to pay. Yet we have no one suggesting an alternative – Keeping Calm and Carrying on seems like an apt slogan to adopt when we have no choice but to do just that.

What is interesting about the original poster is that it was never widely distributed during the war. It was printed for distribution in the case of the German invasion that never came. It was when this unused store of posters was discovered in the mid naughts that the image first came to prominence. On the one hand it seems quite innocent that a slogan that was never needed during the war has found such resonance now. Yet what if we consider what the alternative would be… If we’re being told to Keep Calm and Carry On presumably that’s because the alternative would be to Get Angry and Change Something.

The original was a call to servility, designed to pacify a panicking public in the face of national collapse by invasion. Yet that national collapse didn’t happen, instead it was the crash of 2008 that catapulted the slogan to fame. What’s interesting is that far from being top down propaganda distributed by the Government; its original purpose, this was a bottom up process. People elected to replicate the propaganda for themselves, looking for reassurance that what appeared to be the death throes of capitalism was in fact a blip. As long as we keep calm and carry on it will pass. After all, at least within the British context, we remember that the last time we kept calm and carried on we were rewarded with the creation of the welfare state: the promise that we would be looked after from cradle to grave. Yet now we are keeping calm and carrying on as that very welfare state is dismantled.

We have suffered the same in theatre. A great number of people told me in response to funding cuts that we should stay positive and get on as best we can. Make do and mend. At the Devoted and Disgruntled held at the BAC last month on the value of arts funding – there was an audible gasp and look of disapproval on many a face when any suggestion that anything other than a positive spirit should be adopted. In theatre this can partly be explained by rigorous training in saying ‘yes’ – remaining positive is essential to the creative process – and we are all hardwired to do it. But can I suggest the time to Keep Calm and Carry On may have passed? Isn’t it about time we got angry and changed something?