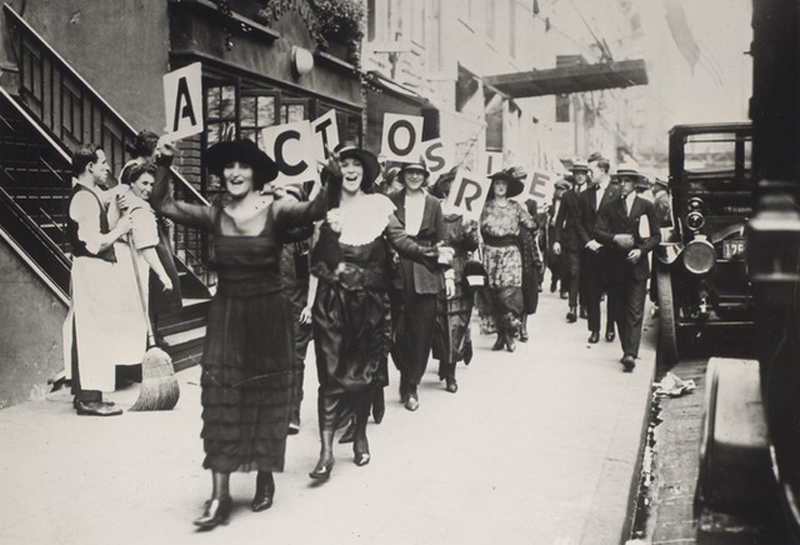 So I’ve just been looking up equity’s advice on running collectives and partnerships. I run a devising theatre company and I believe passionately that it is both creatively and personally better to be in a company that works collaboratively rather than in a top down ‘worker’ ‘boss’ relationship. Sure – people need different roles and responsibilities – but we should all be equal at the end of the day and take equal responsibility for the work that we make. That’s why I believe so passionately in devising as a methodology – and why I encourage everyone to view themselves not just as actors – passive recipients of other peoples work – but rather as theatre makers actively in control of their own work and careers.

However having looked up Equity’s advice on the matter it appears they actively refuse to represent anyone who agrees with me:

Trade unions organise and service workers. Mostly professional artistic workers in Equity’s case, but workers none the less. Workers include employees and contractors, where the contractor is not working for a professional client, has to perform the work personally and cannot substitute him or herself for another. Trade unions regulate wages and conditions by way of collective agreements for those employees and contractors, who can properly be described as forming part of the labour force. The word labour is used in its industrial context here. Trade unions are often referred to as representing organised labour and seek to organise unorganised sections of the labour force.

Partnerships are different from the ‘labour force’. Partnerships are made up of sole traders or other forms of businesses. A sole trader is a business. A small business perhaps made up of a single individual, but an individual acting as a business, or perhaps more properly described as an entrepreneur. It may not feel like that in a profit share play with no money, but the status is different and a partner is not on the ‘labour’ side of the industrial relations fence, a sole trader is on the business side.

Now this saddens me on every level. For a start the language seems from a 1960’s trade union history – completely outdated and irrelevant to todays industry. But it saddens me more because as a fairly unreconstructed lefty from a long line of trade unionists I actively want to be part of a union. Furthermore I passionately believe that workers in every industry should have some control and ownership of the company they work for. As did many in the trade union movement. Indeed one of the greatest pieces of prose of the British labour movement is on exactly that “To secure for the workers by hand or by brain the full fruits of their industry and the most equitable distribution thereof that may be possible upon the basis of the common ownership of the means of production, distribution and exchange”. Presumably though Equity would refuse to represent any worker who dared to cross the line from the ‘labour’ side of the industrial relations fence and actually took collective ownership over the industry they work in.

So why do we need a union at all? Because we are being exploited. Though I don’t agree with equity that the exploitation is happening within the industry. It’s happening between the government – who are quick to enjoy all the benefits of the theatre industry – international soft power like the Olympics opening ceremony, the revenue from tourism and the contribution theatre makes to the cultural life of the country – but the government don’t want to pay for it. And as has been demonstrated by the ease with which this government and local councils have been able to slash the arts budgets no one is effectively preventing or campaigning against this exploitation. In fact far from managing to campaign against it – as I have argued here Equity’s major current campaign – Low Pay / No Pay is actually attacking and demoralising the very people trying to keep theatre going in the UK.

So with Equity actively refusing to represent me and anyone engaged in the kind of collaborative devised work that I believe in – I’m not sure what to do. I have looked through the other trade unions and trade bodies for the theatre industry – but non that I can find seem to be quite right. I guess the ITC is closest – but really it feels just as set in the ‘boss vs worker’ mindset as Equity – just on the other side of the fence. If anyone reading this has a suggestion for which union or trade body would be appropriate for creatives working in partnership I’d love to hear suggestions below. The other alternative is always to just start our own…. I mean if we can run theatre companies – how hard can running a union be?