On Thursday 19th June at a twitter Q&A held at the Young Vic by Belarus Free Theatre and hosted by the Guardian, an audience member asked this question:

‘What kind of art ‘is’ tolerated in Belarus?’

‘Art that does not deal with contemporary issues and does not make people think or cause them to challenge the current regime.’

Red Forest then, the theatre’s most recent work, confounds that decree and would upset Lukashenko’s government, who are currently in the process of returning the country back to a time before 1861 and the era of serfdom by prohibiting workers on collective farms applying for other jobs, in an effort, according to Gazeta, to ‘increase productivity’. 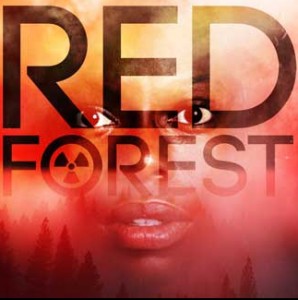 How beautifully ironic it is that Red Forest has at its heart a young woman, Aisha [which in Arabic popularly means ‘she who lives’] who, rather than being forced to stay in her village, is kicked out and spends the rest of the 90 minute performance in a global search for peace and safety, experiencing many of the world’s cruelties and disasters, both man made and environmental, along the way.

It might be said that Red Forest is a ‘contemporary folktale’ raising a finger to Lukashenko’s human rights abuses, albeit from across the water, in exile but finding a home at 66 The Cut, and perhaps confounds the dictatorship even more with its focus on world issues and narratives- it is often argued that Lukashenko’s policies serve to try and keep Belarus safe and isolated from global and economic chaos, in the process creating a country that will look inwards, instead of or as well as, outwards.

This is what gives Red Forest a particular poignancy- it’s not just that it has the ability to look at other governments and suffering brought about by those regimes- but the fact that by doing so, they are able to undermine their own dictatorship even more through a global lens.

The performance itself draws on and is inspired by true stories from the slums of Dhaka, mining communities in Goa, Freedom Park [a former colonial prison in Nigeria], we travel to Brazil, the production is fed by the horror stories of civil war and executions in Morocco, tsunamis, and people are simply left by the police in Algeria to die in the desert.

The use of a sparse set [drawing upon the four elements of earth, water, air and fire] produces a dichotomy through illustrating the beauty of the world we live in [experiencing rain] and its sheer cruelty [flooding, tsunamis, rape, intolerance]. Perhaps a message is also, we can only enjoy the elements if we can protect ourselves from them too.

The beauty is further made transcendent by dialogue- less choreography, live music, narration and film. The materiality of props are transformed from their every day use into symbolic meanings- a woven basket becomes a pregnant belly, and, unforgettably, flashing torches convey one of our more modern and terrifying forms of terrorism and regime brutality. These things are an artistic comment on how a rich imagination can elevate the worst suffering in times of a depletion of humanity, surely one of Red Forest’s messages.

Someone somewhere wrote that Red Forest’s content is ‘almost completely unremittingly bleak’ and that ‘there are no solutions, just a long reminder of the horrors others have to endure’ although this is contrasted by a performance that is presented in a ‘beautiful, human manner’. But I would argue that this is a point, though not the point. The beauty of the performance, the way in which it is achieved, is an example of how such terrors can be over come- surely exemplified by the acts of humanity some characters show each other in contrast to the portrayal of violence?

Its achievement is to link the different kinds of suffering endured by many all over the world through the common, loving, welcoming hand of an art form that challenges, provokes and encourages compassion.

The kind of art Lukashenko does not want his people to experience in Belarus in case it may help heal them and give them power.

This is the tragedy and Red Forest’s other message- that most of the very people who desperately need to see such a show like this, probably won’t. That, if anything, should be a motivating force for action by those like you and me, who don’t have to risk our lives to see this wonderful tonal poem.