Who is the person who really sees? Not the Drones, or the military or the soldier’s husband, but Ellinson’s tragic Major herself.

Grounded is a 70 minute monologue following a nameless female fighter pilot, who listens to AC/DC, yearns to ‘be alone in the blue’ skies where she belongs, hang out with the lads in the snooker halls and bars at night after a hard day’s flying, but whose career is brought up short by pregnancy and whose return to the US Military coincides with the use of Drones as ‘eyeless’ and ‘pilotless’ killing machines in the Middle East. The Major goes from G-Force to ‘Chair-force’ as the war is fought in ’12 hour Drone shifts’ where the soldier returns home every day to her daughter, after ‘killing me some military aged males’ thousands of miles away. In time Lucy Ellinson’s fighter pilot suffers confusion and breakdown as she is forced to play God and we watch her eventual descent into Court Martial. 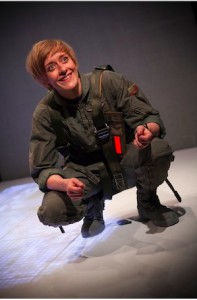 But Grounded is about lots of things. First, it seems to be about responsibility and the nature of spying. From the offset the audience are invited to see themselves as witnesses, Oli Townsend’s set is itself symbolic of the Drone’s ‘grey screen’ the soldier watches as she ‘faces the screen, the desert, the war’, it’s a military tarpaulin prison, a torture cell and her mind too, and as we watch the soldier watching others and herself being in turn watched by her ‘back up team’, the question is surely asked, if we are witnessing her witnessing herself being witnessed, who is witnessing us? A small subplot when the soldier is on leave and takes her daughter to the mall, effectively explores this and the realization that everyone, from sales assistants to military personnel, watch each other through CCTV and that, increasingly, the act is encouraged and applauded and appeals to the more primitive forces within us.

This then seems to lead to the question of omniscience and omnipresence, the need to be Godlike, and in practical terms, how much chance the enemy is allowed to get away- in military warfare the Drones are the eyes in the sky that cannot be escaped from and war is even less of a level playing field. The play effectively explores why the Drones are such awful inventions- in effect they are 24/7 killing machines, eternally in combat. Army messes are taken away, places where soldiers could hang out ‘externalizing’ the day’s events after a day’s flying are no longer needed, instead, Ellinson’s Major has to return home to her role as mother and wife, with no opportunities to externalize the day’s events. It could be pointed out that this is the real enemy- someone thought they were creating an ingenious killing machine, canceling out almost all human capacity for error, Grounded shows us yet again, that the human heart and mind is not a machine and can’t be treated as such. In an effort to deal with killing people thousands of miles away, at no danger to herself, a fighter in a war that is hardly fair to the enemy as a result, Ellinson’s Major begins her own flying experiment. Acting as her conscience and her desire to really fly again, the soldier astral projects, where once she saw the blue sky, she now experiences even sex as grey thermal images from above. Stripped of any ability to associate and swap experiences with colleagues, she free associates with the only person she can, the enemy, but with whom she can never really meet or see in color; the enemy she chases, the Prophet, whom she begins to fantasize, drives a car like her’s, who, such is her transference, makes her want to piss when he does, and who’s daughter takes the face of her own child just as she is about to press the exterminate button. It’s an interesting essay on what happens to a person when the normal natural outlets for emotional and intellectual expression are taken away from them- they come out in perverted form.

It’s no accident too that the Drone base is in Las Vegas either and resides in the shadow of the pyramid, the all Seeing Eye in Egyptian mythology. But who is the person who really sees? Not the Drones, or the military or the soldier’s husband, but Ellinson’s Major herself. The scales come off and the Major undergoes a personal break down in the quest for personal truth and at huge tragic cost.

Grounded plays until 30th May at  Gate Theatre, Notting Hill