Review of: A Small Family Business

Funny, charming with a sinister twist - how far would you fall for your family?

Proving that even the most regular of families are in fact a consorting bunch of fraudsters. Alan Ayckbourn’s play, which he wrote whilst at university, consists of a few simple elements which when put together create a complex and suggestive story.

Reading the National’s programme, it’s inclusion of articles focusing on the decade the play was written in and the political upheavals added an emphasis I had not considered before. Furthermore, Ayckbourn’s own insert focusing on memories of city businessman crowding the commuting trains from rural Sussex displayed the economic themes within the piece. In consideration of these themes, mixed with the presentation of the play and the characters within it, they displayed the nouveau riche stereotypes and the shadier aspects of this lifestyle. The desire to become middle class, or at least perceived as such, whilst maintaining an income that affords this style of living – presented difficult in the UK’s economy.

Funny, charming with a sinister twist – how far would you fall for your family?

In the production this was initially communicated through Poppy, Jack’s wife played by Debra Gillett and her friend/sister in law, Anita, played fantastically by Niky Wardley. The women share lots in common – on the surface – apart from Poppy whom holds a firm but reluctant skill with budgeting and Anita with a stronger ability to turn a blind eye to her hoard of knock-off luxury items. Anita portrays this ‘nouveau riche’ stereotype to the detail, representing the luxury and glamour which Poppy ultimately pines for. In sharing her clothing and stiletto shoes, only worn a few times, Anita introduces Poppy to these desires and prompts her wanting for this lifestyle further. Wardley’s performance was spot on in the way she held a confidence and self-assurance with the ability to wrap Tom, Dick or Harry – or in this case any of the five Rivetti brothers – round her perfectly polished little finger. 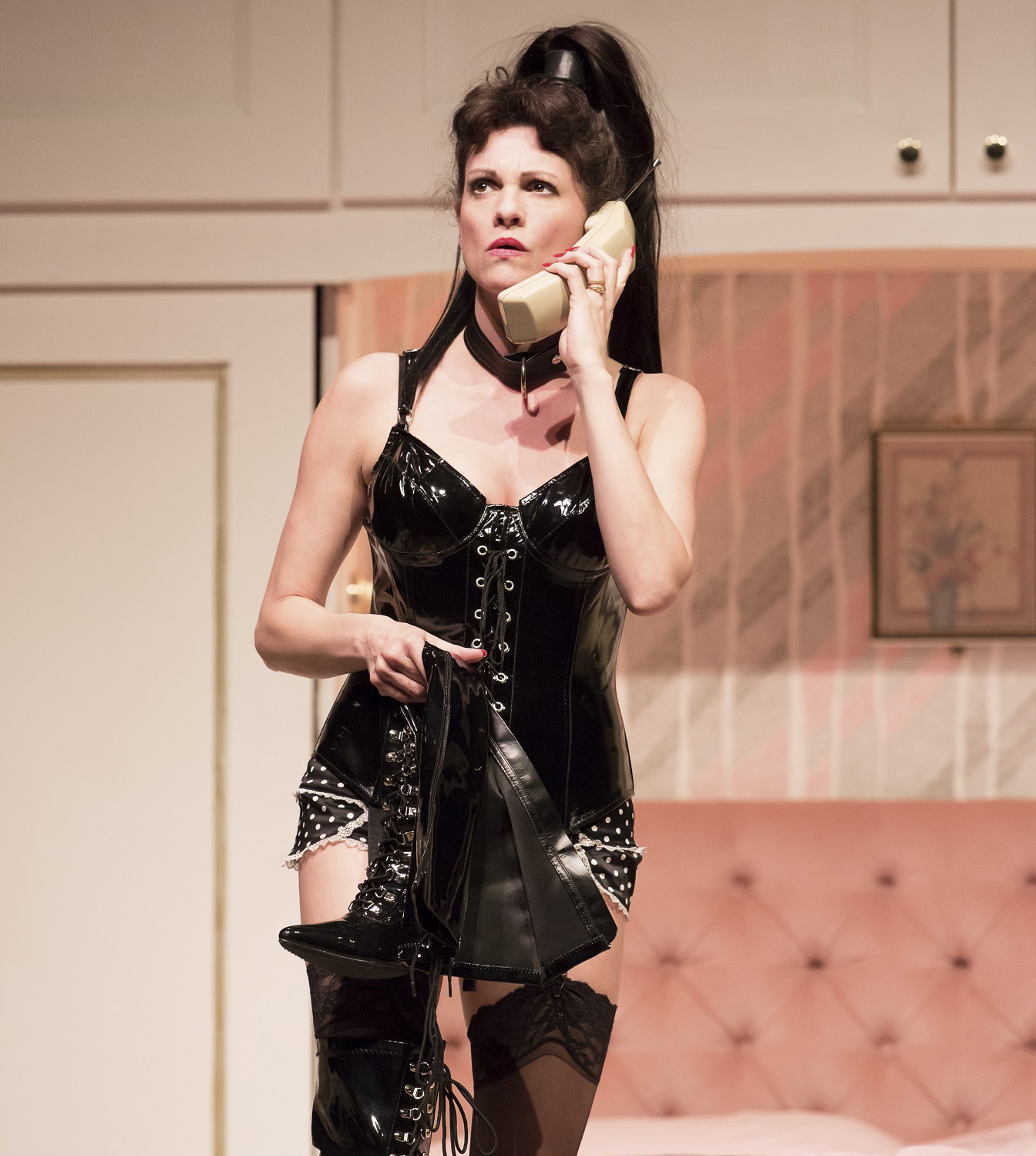 A theme I found most relevant in the play was the process of making major morality and conscious-questioning decisions, which was displayed in Jack’s character, played by Nigel Lindsay. He represented the honest, hard-working, kind, husband and – if not a little awkward at times – supportive father. His down-fall and human error, as it were, was a short temper and in fact his commitment to his family. This is the accomplishment in Ayckbourn’s writing as you can see the way he allows his characters to create their own journey, after lending a few nudges here and there. But this complex style of play means there is so much beneath the surface that not even the characters themselves are able to reflect on their situations. For example with Jack, the honest and moral standing which he holds so highly becomes twisted and manipulated through a variety of hilarious and sinister junctures by the final curtain. This is interesting as at the end you can see how he still believes he is a man unchanged, but it is clear as a bystander he is dramatically converted.

The design, by Tim Hatley, created a picturesque home which was both flexible and thematic. I commend him on it’s simplicity in representation of the home and the showroom style in which it can be perceived – which I think there are two reasons for. The first is for sheer practicality due to the play, as at one point each room is used to simultaneously represent four different character’s homes – which with quick lighting and expertly timed performances was incredibly effective. My second reason reaches back to this desire to be middle-class and holding the nouveau riche stereotype of maintaining a lovely – and usually big – house. This design played upon the repetitive image of the semi-detached housing, of the same knock-off handbags and commuting businessman in their identical black suits. The view is then, that despite this ambition to one-up your neighbors and aspire for more than your pay packet – you essentially all have the same things. I found these themes I have touched upon therefore did a full circle within the piece and actually left a sour taste in my mouth, considering the way each character sacrifices their morality in order to reach these unattainable goals.

Essentially the representation of family and various in-laws was very honest and personal to me. In mainly the relationship of the sisters, the eldest being Tina, played by Rebecca McKinnis, and Samantha as the teenager, played by Alice Sykes, reminded me of many bickering arguments with my own. Although they fundamentally came back towards a supportive and caring friendship, which again I felt was relatable to my experiences. The play encompassed both archetypal and truthful portrayals, although the structures of the relationships were very convincing and honest. So when the question of – which I feel summarises this piece well – how far would you go to keep it in the family? It’s a tough one…

Hello I'm Hannah, I am an aspiring producer looking to collaborate on productions in London and South East England.@hannerturkReviewsMy Thoughts On....various plays from past and present that I have seen. I am no real critic, but I love theatre and believe collaborations thrive with a little constructive criticism...right?