Review of: The Heads

Puppetry should do what a performer cannot. That is the extraordinary thing about the art form and when executed with the precision, finesse and elegance as in The Heads the result is beautiful, affecting and, I hesitate to write for fear of devaluing, magic. 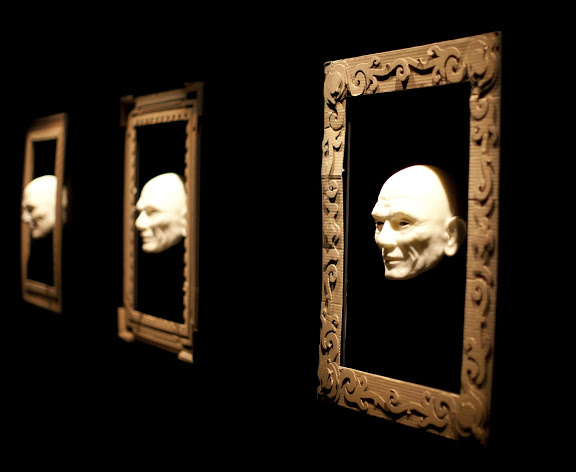 Puppetry should do what a performer cannot. That is the extraordinary thing about the art form and when executed with the precision, finesse and elegance as in The Heads the result is beautiful, affecting and, I hesitate to write for fear of devaluing, magic.

The Heads cannot be reviewed as a play. It is more appropriately thought of as a piece of fluid art. Quite fitting is it that the performance takes place behind three frames, as in a gallery. Heads, objects and shapes float in chasm-black space as a delicate, morphing narrative unfurls.

Some audience were disappointed by the piece, regretting it not to be more like Blind Summit’s big hit The Table. But credit should be given to the company for creating such diverse work. The Table is almost introductory in comparison to the potentially highbrow The Heads, yet both shows deliver the same at their core. They are raw, honest and daring. No folklore, no frills, just hardcore puppetry. Blind Summit pledge ‘Extreme Puppetry’ and this is what The Heads, undoubtedly delivers.

Mention must go to Jon Whitten for his composition – at times harsh and unsettling it heightened the senses, beautiful and emotive, it was an accompaniment that neither drew attention nor went unnoticed.

Despite its wonder the piece is incomplete and the company continue to develop it. There were moments where I gasped, some when I cried and others when I was just a bit bored. But I have such confidence in The Heads and look forward to when it is finished; I believe it could be a masterpiece of its kind.