Review of: House of Atreus

A play of great humanity but more emotion needed 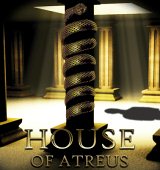 Ah, Greek tragedy. You’ve got to love it. Picture the scene; after ten years at war and some nasty weather on the way back, a King returns to his wife who promptly murders him and then dismembers the body. For some reason the fact that said King sacrificed his daughter on his way off to war (more weather problems) is not considered sufficient justification for his wife’s less than loving welcome and so their remaining children gather to avenge his death.

It is at this point that the “House of Atreus” opens and takes the story of this benighted household even further into tragedy.

It’s a clean set; simple and elegant and nicely evocative classical Greece. It’s light too which is refreshing: we know it’s a tragedy, but the “reveal” is yet to come; the set doesn’t preempt the action. I only wish the costumes had been designed upon similar lines: the choice of modern day dress didn’t seem to have enough to say for itself to justify the jarring effect it had on the production as a whole.

The Chorus, excellently choreographed throughout, make their initial appearance with an act of morning which appears to combine yoga moves with a stylised imitation of seppuku. As a piece of theatre it is certainly interesting and works from a classical point of view but, as someone who wants to hear a play as much as see it, it seemed a fraction too long. The use of masks for the Chorus is intriguing: the masks themselves are beautiful and there is something pleasingly artful in the ceremonious way in which the masks are distributed and put on by each individual member but the fact that they have been unmasked up to that point suggests that there is a reason they cover their faces which is never made clear.

Sofokleous provides good presence as Orestes though during his first address to his murdered father he appeared to be looking anywhere but out at the audience, something that was not repeated on his subsequent appearances I found I wanted a little more declamation in his first address, something I got from the entrance of Electra (Young). However her voice, initially so commanding, became more breathy as the emotion within the text began to assert itself and, in combination with the school uniform, reduced her from strong, would-be avenger to a tearful schoolgirl which, curiously, made her much less sympathetic. In the same way, Electra’s description of the shameful dismemberment of Agamemnon appears to have little effect on Orestes. Even by modern-day standards, the dismemberment of a dead body is something so shocking it makes newspaper headlines; to a classical society in which honour is all important (Homer describes lengthy funeral games to honour the fallen at Troy) this is an act so heinous that it almost outranks the murder itself. Yet there is no sense of horror in Orestes’ reaction and the almost sexual excitement of the chorus at the sight of his knife appears to have little to do with justice.

Moon and Williams provide a bit of sparkle as the tango-dancing Clytaemnestra and Ageisthus. If anything their appearance in the first act is too brief: more could have been made to illustrate the nature of their relationship. Their second entrance, at the beginning of Act 2 appeared to be halted by the fulsome presence of the chorus.

The Chorus in all its jeering, conniving and gloating glory is this play’s great strength though I felt that the brief dialogue between individual members undermines its purpose and its power. Their use of movement in the second act hints at a lyricism that, regrettably, isn’t quite reflected in the script. I understand that Ozhabes adapted this script from a number of translations of Aeschylus’ “The Libation Bearers”, with elements of “The Eumenides” and some passages from Electra (Sophocles). The script works but it doesn’t quite flow. I liked the inclusion of the “Electra” story – in the Lattimore translation of “The Libation Bearers” that I read Electra inexplicably disappears once Orestes has arrived – but at the same time I felt that it muddied the waters somewhat. Part of the problem is that, having set up the vengeance theme in Act one with Orestes’ as the “Man of action, Electra now pops up in Act Two and rebukes her mother like a stroppy teenager with a Hamlet-like obsession over what exactly her mother is doing with her step-father. The modern-day resonances do not go to waste but, again like Hamlet, we do lose sight of the task of vengeance in hand as Electra goes from school-girl to vamp. Dressed in her mother’s clothes, her demand that Orestes dispatches her mother has more to do with Freud than her father and her attempt to seduce her own brother is just puzzling.

Cheska Moon is suitably chilly as Clytaemnestra. Her reaction at the news of the apparent death of her son is deliberately insincere but I would have liked to see some intimation of expression to show us why. As it is it takes the nurse; a genuinely warm performance from Joan Plunkett, to tell us that the Clytaemnestra’s grief is well-lined with relief.

The death of Ageisthus is deftly done behind semi-opaque curtains. It is a brief scene and would perhaps have been even more eloquence if it had been done silently ahead of the powerful reveal of the raised curtain. Having started his programme of revenge, Orestes sees off his mother in short order and this is the point at which the story really gets interesting. Only when his mother is lying in a pool of her own blood does Orestes begin to doubt the justification of his actions. The rise of the Furies is effectively done but I wanted a greater sense of dawning horror from Orestes; he hasn’t run over a cat, he has murdered his mother. It’s all there in the voice but I felt that he was leaning on the script, it’s a bit too controlled. He tells us “I lament my act, my suffering” and we can see that he is suffering but we don’t really feel it and so can’t quite believe it.

There’s a lot to like in this production: Waterloo East is a pleasant venue and the Olympian rumble of passing trains can only add to the staging of Greek tragedy. The movement is slickly choreographed and the unison of the Chorus is frankly impressive. Kaitlin Argeaux’s direction of a complex play keeps up the pace and gives the whole piece a flow that I would like to have seen echoed in the script itself. However, for this review to get another star I wanted more emotion from the principal actors. The tragedy of this play is in Orestes’ horror at his own actions. In the preview that I saw, that didn’t quite come across. Having said that, it’s a high calibre company with somewhere to go so I can only hope they complete the story with “The Eumenides”.