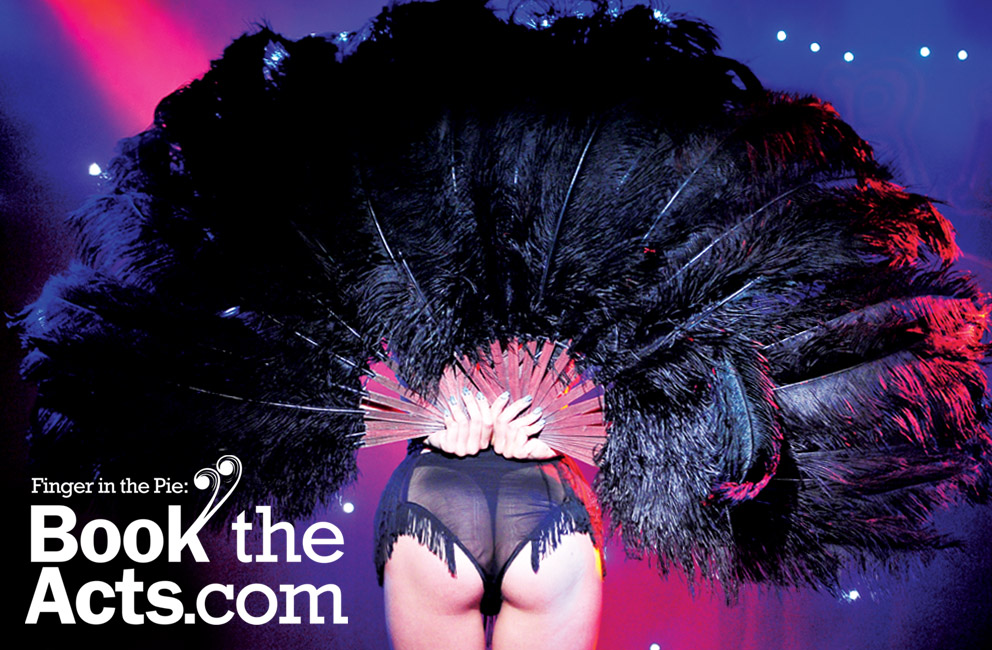 Award winning cabaret producers Finger in the Pie have just launched a brand new act booking service BooktheActs.com. It promises to give corporate and private clients the chance to book some of the best acts from Finger in the Pie’s West End shows. Finger in the Pie’s Artistic Director Alexander Parsonage commented – ‘there’s a real taste for cabaret and variety performance right across the UK now. BooktheActs.com will give people the chance to book some of the biggest names of the cabaret scene for their corporate events, private parties and clubs. It’s a great departure for us at Finger in the Pie and promises to be a valuable service for both our performers and the public.

Finger in the Pie’s monthly cabaret night at Madame JoJos in London’s west end celebrated it’s six birthday this February. In that time they’ve launched the careers of many of the most celebrated artists on the cabaret circuit including Bourgeois and Maurice (winners in the 2012 London Cabaret Awards), Doctor Brown (winner of the Fosters Comedy Award 2012) and Myra Dubois (Shortlisted for the London Cabaret Awards 2013). Their new BooktheActs.com service will be open to corporate clients, restaraunts, hotels and private individuals. For more information please visit www.booktheacts.com. If you would like more information about Finger in the Pie Cabaret’s public performances please visit www.fingerinthepie.com/showcase.

Finger in the Pie Cabaret facts at a glance:

★ Finger in the Pie Cabaret started in Feb 2007
★ Finger in the Pie Cabaret has showcased over 500 individual performances from a total of over 580 different performers.
★ Performers who made their UK cabaret debut with us include – Bourgeois and Maurice (winners in the 2012 London Cabaret Awards), Doctor Brown (winner of the Fosters Comedy Award 2012) and Myra Dubois (Shortlisted for the London Cabaret Awards 2013)
★ Artistic Director Alexander Parsonage won the 2012 Best Artistic Director at the Fringe Report Awards
★ Finger in the Pie’s Stage-management team shortlisted for the 2013 ‘Unsung Heroes’ at the London Cabaret Award
★ New for 2013 Robin & Partridge (BBC3) become our resident comperes – joining the ranks of previous residents: Moonfish Rhumba, Myra Dubois and Vixen DeVille