Review of: Four Days of Grace 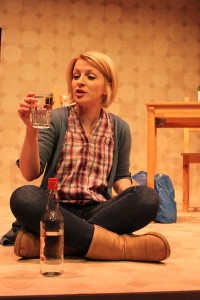 Four Days of Grace is the story of a mother, in her kitchen, waiting for a fridge to be delivered. She seems perfectly normal, getting frustrated with the delivery system, looking forward to having fresh produce to cook… except that it isn’t really the fridge she is waiting for, it is all the things that she will have and be able to do when it arrives, like have the perfect day with her son.

While Clever as Clever theatre group’s previous play Public Interest looked at the effects of war on the men involved, in a cerebral, ‘make your mind up about torture’ – sort of way, this is a microcosm of the impact war has on hearts at home. And yet, it doesn’t seem to be about war at all, it seems to be about lettuce and not ravaging your neighbours’ hedge, to make a fantasy garden in your sitting room to impress your traumatised seven year old.

Designer Tom Power creates a simple but wonderfully effective setting for Grace. Her kitchen floor slides all the way up to the ceiling, wrapping her up, enclosing her in her own mind. Beyond the flooring is a film projection of the black and white street. The effect is a girl in a box in a box, with constant playing radio-background music as the bow on top.

The comedy comes in Rachel Marwood’s physicality, directed with subtlety by Kamaal Hussain as well as her accents that have the audience in stitches when she takes on the personas of call centre staff. A comic rhythm also comes from her remembering her shopping list ‘toothpaste!’ at seemingly random intervals. But for most of the play, thanks to Drew Ballantyne’s snakes and ladder-writing, you have no idea whether to trust her, or whether she will turn out to be a psychopath. Is she mad to want ‘a break’ from motherhood and to wish a heart attack on her fat colleague? Why does she direct her frustrations out on the social worker instead of staying sober? Why does even SpongeBob make her feel inadequate? But still, somehow, we relate, she isn’t that many notches away from normal.

The beauty of the writing is in capturing an unhinged widow through domestic details. The two audience members Joe Law and Beth Watson, both actors, loved how the kitchen setting was used to create tension. ‘There’s nothing more dramatic than starting the play with a boiling kettle’ Joe said and I agreed with Beth’s analysis of the falling beans, which were dramatic due to plot timing, but also because of their slow motion tumble.

Lettuce, the doorbell, smoke on a mirror all seem like mini ways out, solutions, answers, release and just when you think she will never get out of her fantasy garden… Because the play is really about love and anticipation and never before, as far as I know, has anyone managed to capture love through the medium of baked beans.

Four Days of Grace is playing at the New Diorama until Saturday 7th April www.cleverasclever.co.uk
www.newdiorama.com