Review of: Gags, Bombs and Songs!

There's Meat in this Sandwich 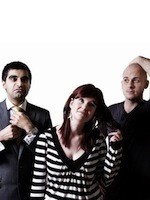 I first saw this show up at Edinburgh this year. They were good then. Now they’re great. Obviously, material-wise, it’s pretty much the same show. However this collective hasn’t been resting on its laurels, they’ve used the past three months to really tighten up the act and, last night at the Leicester Square Theatre, we were rewarded. What was a good, switched-on and entertaining show at Edinburgh has matured into a slick production that should be on every agent’s wish-list.

Of course it helps that every one of the performers comes trailing clouds of comedy glory in their own right. First up, we had Tez Ilyas, a finalist in this year’s BBC Comedy Award who also compered the evening. He bounded onto the stage with an irrepresible grin and immediately engaged the audience by greeting them in a variety of different languages, even learning a bit of Turkish on the way, before sliding into his set with an “ironic” game of rock, paper scissors, and the differences between Catholicism and Islam, according to the gospel of Robert Murdoch. A warm, likeable performer, with an eye for topical gags and an impressive stage presence.

Next came Kate Lucas. When I was still doing stand up last year, I had to follow this woman at a gig in Covent Garden. Faced with that prospect again I would turn and run. This is musical comedy of the highest calibre. A sweet voice belies the bitterness of the lyrics and the implied violence (although in the case of Janine, cashier number 4 I think we’ve all been tempted) but it is the wit in the writing that allows us to roar with laughter while being aware of the poignance of the often very real situation underneath. I really hope she releases a CD of this stuff; even relatives I don’t know would get a copy.

Bringing it home was Les Mis fan, Gary Tro. He follows the two preceeding acts without ever letting up on the quality of material. The mirror face-off was a good opener and his League Table of Fast Food Restaurants was well-developed though I’m not sure Nandos would be the proposal venue of my choice! The bicycle cops was, for me the highlight of the set and the ext time I cyclist jumps a red light, at least I can comfort myself that I was almost run down by a transformer. Bullshitting through football was simply inspired. A very personable presence who knows how to use silence to build up gleeful anticipation (though I’ll never again be able to watch “The Lion King” in quite the same way). The one criticism I have is that this performer has a nervous habit of touching his nose throughout the performance. I would suggest that this is something that could be worked on, or worked into the act.

As a comedy-goer, I am really hard to please but in this one show you’ve got three comedians at the top of their game. It was a fabulous evening in a lovely venue. You’ve got one more chance to see them here, they’re performing again on Tuesday 29th November at 8.30pm. Tickets are only £8 and, in my opinion, you’re getting a lot more than you pay for.