Review of: Austentatious: An Improvised Novel 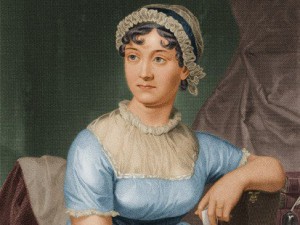 It is a truth universally acknowledged that comedy improvisation is bloody difficult to do well. However, in a well-appointed room about The Compass Pub in Islington, The Milk Monitors acquitted themselves with rare wit andgrace.

The ambience of the evening is well set from the beginning as the audience (I was seated at the front but it looked like a full house to me) is welcomed by the rich tones of a cello into a room that would not have looked out of place in any world of Miss Austen’s creation. Admittedly, “The Skydiving Garden Party” was perhaps not the most happily titled of her more well-known novels, but the company took it to their hearts with impressive speed, launching almost directly into the improvised song “Two Fathers One Heaven” courtesy of Rachel Parris with harmonisation from Amy Cooke-Hodgson.

One of the joys of watching improvisation is seeing how the performers set each other up – “I remember that song! Perhaps you’d like to sing it?” – and get themselves out of tricky situations – “Perhaps it can wait until later”. As the audience, you’re in on the joke and it had the entire audience roaring with laughter from start to finish. It wasn’t always clear where the story was going but it didn’t much matter. The audience could relax and enjoy, safe in the knowledge that it was in the hands of masters of their craft.

It is worth mentioning the quality of the characterisations in play: the language is beautiful, poetic, sometimes impenetrable but always delivered with absolute confidence and without ever once stepping out of character. So much so that you found yourself eager to know what happened next and actually caring what befell the somewhat eccentric jumble of characters. The final love scene between Eleanor and Edwin was truly moving, even when the ardent Garden Designer confessed that he had engraved a letter to his beloved on a young sapling with tweezers.

There were some noticeable anachronisms but these added to the fun of the evening and were thoroughly enjoyed by us all. Having said that, I’m not quite sure that Jane Austen ever wrote the line, “Just roll with it Campbell”.
Very, very funny. It’s back at The Compass on 22nd November, and well worth the £5 admission. Highly recommended.
Milk Monitors; my compliments.
Cast: