Review of: Ourselves Alone

Superb writing with a cast to match 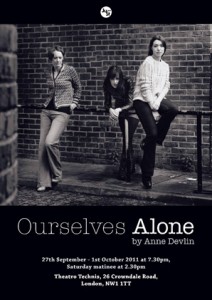 Last week I was in Belfast making arrangements for my part in the Belfast Fringe next month. The Belfast I know is a lovely city; creative, gracious and hospitable. The Belfast I found myself in yesterday was one I’ve never known beyond the news reports. But for anyone who, as a child, listened to reports of The Troubles and wondered why the people didn’t just leave, this play goes a long way to inform while it entertains.

It’s a strange feeling to have to edge past an armed squaddie while finding your way to your seat (and you make damned sure your mobile phone IS switched off!). There is something very poignant about the image of two British soldiers and an RUC officer occupying the stage while the melancholy tones of an Irish-language folk song fill the auditorium. It is this unspoken tragedy that forms the backdrop to the smaller tragedies and injustices explored in the play.

For all that, this is an entertaining play. The first half in particular is shot through with humour as well as heartache. The three women are well written: their individuality of each is clear and yet subtly drawn so that the personalities complement rather than clash. There’s Josie (Aoibhéann McCann) heartbroken over a married man, Frieda (Stephanie F O’Brien) who appears to care only for songwriting and Donna (Jude Schweppe) the peacemaker of the three, tormented by her wakeful child and absent husband. All three actresses give such accomplished, nuanced performances that I believed the characters from the beginning and really cared about what happened to them as the story unfolds.

What immediately strikes you is the sense of normal life continuing. In the opening scene, Frieda rehearses a song for a forthcoming performance. A portrait of Bobby Sands may be hanging on the back wall but Frieda’s concern is for her career as a singer / songwriter. The scene in Donna’s house, with it’s laughter and squabbles is warm and real: the familiarity of the domestic scene serves to highlight to more sinister “normality” of the threat of army raids.

The tone changes with the arrival of Joe Conran (played by Gregory A Smith). An upper-middle class, public school educated Englishman, he seems an unlikely IRA volunteer made even more sinister by the fact that he doesn’t drink tea. Maurice Byrne gives an impressive performance as “Big Fella”, Malachy McCourt. He says little but what he dominates the stage at each appearance and he’s a man to be listened to.

The play darkens in the second half as the lives of the three women develop. Donna’s husband has returned as has her sense of guilt that she first married another man and has since abandoned her son by him, realising too late that the child is more than the offspring of its father. Josie gives up on her married man and, reveals herself to be more than just a courier for the IRA when she first interrogates and then seduces Conran. Frieda finally seems to find the happiness she has longed for happiness when she takes up with the protestant socialist John McDermott (played by Cameron Robertson with all the earnest affability of a Sunday School teacher) only to be beaten by him in a particularly shocking scene.

By the end of the play, the family is about to be scattered but the women at least are as close to each other as ever.

The direction is very slick. The play benefits from a sparse set and an expert use of the space available: everything we need to know is in the writing and this production gives it room to breathe. When the writing’s as good as this, success is guaranteed.

There are actors I haven’t mentioned specifically. This is a reflection on the space I have and not on them. There wasn’t a bad performance in this piece. Very impressive. I’ll be looking out for more from this company.