Great direction and performances... but the script could have been tighter! 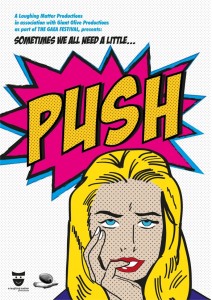 The flyer for the show read “Sexual perversions threaten the `perfect` relationship. Can religious therapy or rehab be the answer?” An interesting premise but one that the play didn’t really live up to.

It opened promisingly enough; four actors sat in a representation of the tube joggling back and forth convincingly as we were introduced to the standing Emily. The run through of sexual positions with the dead-pan co-operation of the other passengers was fun and energetic and set us up for… disappointment. What followed was a long evening spent with a lot of characters, none of whom were especially well developed and who didn’t really seem to go anywhere. I understand that the characters and setting were supposed to be stylised but, if so the writers needed to be braver, pushing into absurdism, even. This was very nearly achieved by Matt Andrew’s whose performance as Ross, was almost pantomimic in his crude chauvinism, his hand apparently welded to his hip. Another striking character was Fionnuala, played by Aoife Madden who had a fantastic presence on the stage but was ultimately let down by a character that seemed to change over the course of the play, declining from a hilarious eccentric woman to a kind of Lear’s Fool who was also criminally indiscreet.

Kaitlin Argeaux’s direction was one of the strong elements in the play. When Emily returns home to her boyfriend, he says nothing but pulls her into a waltz and later a tango as she chats away about her day. The couple are in-step but Emily appears slightly reluctant to follow his lead, a lovely metaphor for the dilemma she has reached in the relationship. I was dying to see what an argument would look like.

The performances were very strong, the actors knew what they were doing but I wasn’t sure where they were going. The dialogue didn’t spark; the play was humorous but it lacked wit. The play’s premise was interesting but not overly complex so it needed to be either very sharp and very witty – perhaps even satirical, or it needed to forget the jokes and go much much darker. What we have at the moment is an uneasy half-way house: Bridget Jones got Mark Darcy but now thinks she would rather be having sex with strangers.

For me there were two main problems with the play. Firstly, it is that it was about half an hour too long. For me the rehab discussion group (religious therapy didn’t get much of a look-in) was unnecessary and even the night-club scene, while well acted and enjoyable to watch, didn’t really go anywhere. Some of the characters, too, struck me as surplus to requirements, Adam Scales was engaging and likeable as Malcolm but the character didn’t really add much to the plot. Secondly, there was too much “telling”, one of the mortal “sins” of play-writing and one of the easiest to succumb to. It’s like watching a play with instructions; it’s flabby writing and suggests a lack of assurance. However, writing is something that can be toned up with exercise. When the writing is as fit and lean as it can be you can HEAR what needs to be cut (though a good, critical editor should always be close at hand).

Having said all that, I went on opening night and the audience loved it. There was a lot of laughter and for a miserably wet Tuesday night, that’s quite an achievement.