Review of: The Untimely Death of Mr String

"Proceed. This is weird." 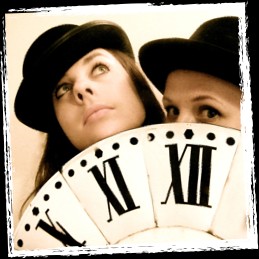 If someone had told me that The Raven Theatre Company’s “The Untimely Death of Mr String” was theatre in the absurdist vein, I would have avoided it like the plague. It just goes to show that ignorance really can be bliss. This is a really strong piece of theatre. It is, well, “bizarre” is the word that comes repeatedly to mind, but it’s also well thought out and executed with such confidence that we the audience can relax, safe in the knowledge that we are in the hands of masters.

The plot is a simple one. Mr String (played by an engagingly bemused Ben Hale) suddenly “comes to” on a train not knowing who or what he is. We follow him to work (he turns out to be a solicitor) where he is variously balled out, threatened and flattened by his boss (played by the show-stealing Naveed Khan) before agreeing to defend a self-confessed murderer in a court of law. Mr String concludes his case by putting Time in the dock. His client is saved and Time is dismantled. At first all is well but without Time, the world as Mr String knows quickly collapses into a heap of happenings void of meaning.

This shift is done simply but effectively by Mr String’s straight-to-microphone reactions. And this is one of the strengths of the piece; it’s all in the writing and performance. The use of lighting provides an effective illustration but it doesn’t take over; there are no short cuts, just quality throughout. The characterisations are assured, skillful and in many cases hilarious. Particular highlights include the already mentioned Boss, the Judge and the Welsh shopkeeper but make no mistake; there isn’t a weak performance in this piece. What makes this show so pleasurable is the sense that the performers are equally weighted; each actor knows what they’re doing and they do it well. Even the singing, something that strikes fear into many an actor’s heart, is executed with a reassuring sense of confidence and The Excuse Me Blues is a delight of almost nostalgic poignancy, beautifully harmonised.

The only false note in the piece was the tea-lady. The interruption (and resumption) of the altercation between Mr Strong and his boss was hilarious but the tea-lady had a bit too much of the Mrs Overall about her. It seems to me that, ever since Julie Walters donned that apron no actor can cross the stage with a tray without paying homage. It’s a temptation that should be resisted because it momentarily snatched me away from the world of Mr String and set me down in the middle of Acorn Antiques. But that is truly my only real criticism, it is a skilfully written, beautifully executed show and I would heartily recommend you catch it while it’s at the Fringe. I will certainly be keeping an eye out for more from this company.