Review of: Public Interest at the New Diorama Theatre 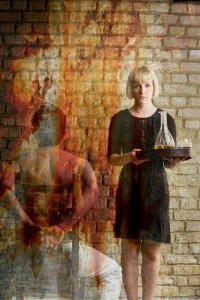 Public Interest starts with Ellie, played by the Bambi-eyed Rachel Marwood, strewn across a bed in her underwear, eating pink ice cream from a tub.

Ellie represents the eyes of the public about to be sucked into a disagreement between Lt. Colonel Warner, played by Sidney Kean, who trains soldiers in the art of torture and his lawyer and former member of his team Captain Lucas, played by Tim Dewberry, who is trying to get him to think like a politician at tomorrow’s Public Inquiry. This play is based on the real Public Inquiry into the death of Baha Mousa, an Iraqi civilian who died in Iraq in September 2003.

With a topic so prickly, it would have been easy to pull heart strings, so I was impressed that there was absolutely no attempt to do so. This play is cerebral, it feels like a brain maze that fills your mind with questions and then refines them into smaller chunks. Here were some that cropped up: How does rumour or bad intelligence happen within the army? What does it means to cross a line ‘marginally’? Is it possible to have just one bad apple? Does winning make you right? What is the difference between hooding for transport and illegal hooding? Is military law different to law? How does war change when you’re no longer fighting a country?

Ellie sees the Lt. Colonel’s job as being a sick game of bullying, particularly when it is revealed that Baha Mousa died with 93 separate injuries. She can’t understand how trained soldiers can miss out on the ‘don’t kill’ part of their interrogation training. But the two men on stage remind her they teach mental torture, which only just creeps over the edge of law. They do not use physical torture on detainees because they don’t believe it works. “He wouldn’t have died if we had trained them.” Lt. Colonel says.

They are also aware that it doesn’t matter what they think is good, because the public and the media will not focus on the delicate balance nor on the specifics. This play is an attempt to focus our minds on these two things, “the last salvation we have is our specificity.”

At the end of the play there was total silence, as the audience tried to digest all the questions. The overall feeling was that we liked the small twist, appreciated the journey and were impressed. Michael Green, an actor in the audience said “I’m not hugely into politics, but for a three man cast to make all the fine details understandable and engaging is exceptional.” A combination of Tom Power’s talent at creating a cosy world for his three characters, great timing in the delivery from the cast and Rachel Marwood’s tough but fragile portrayal of Ellie, made this play feel warm and human. In the end you feel as confused as Ellie, who really isn’t sure whether to smack her tub of pink ice cream in the Lt. Colonel’s face, or sit with him and chat about his grandkids.

Public Interest is on until the 25th of June, for the trailer go to:http://www.youtube.com/watch?v=ab1PzVE1rT0

Written by Drew Ballantyne
Directed by Kamaal Hussain
To read an interview with the writer and director go to: http://www.offwestend.com/index.php/news/view/102