Review of: Paper Wings at the Space

A puzzle plot for social justice 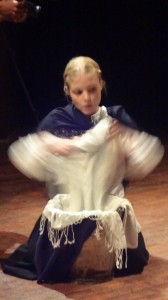 The Beehive Theatre Company presented their work in development Paper Wings, a beautifully slick play about social justice. But before you yawn, this is the opposite of a preachy, plot-less play. The title refers to a little red book, the play’s McGuffin that links the separate story threads and propels the narrative. The different stories take place in London during 1811, 1841, 1941, 1979 and 2011 and when I asked the cast which era they would cut if they had to, they said that each era is essential in telling the whole story.

Does it work? The guys in the audience beside me said that these different eras was one of the best aspects of the play, because it felt like a riddle they enjoyed trying to solve.

The timeline that felt most gripping to me was the 1800s brothel, where prostitutes are brutalized by each other, by disease ‘pissing pins and needles’ as well as by their clients. This section demonstrated the actor’s ability particularly in the wonderfully troubled Polly, played by Amy Tweed, who suffered at the hands of the sadistic Earl, but also James Hayward’s performance as the poverty-stricken George, who tried in vein to propose to the prostitute he loves. Asta Parry’s wonderfully oblivious portrayal of Lady Julia Missenden provided comic relief, when mistaking the Earl’s presence in the brothel for charity.

I liked the Studio Ghibli element to the play through the use of live music, which the cast decided to include when they realised the talent they had amongst the actors. It was particularly effective for the montage moments when Hope and Poverty stepped into the various plots or made the book float across the stage. The director Helen Tennison made a brave choice in placing the audience along the outer edges of The Space and the stage in the middle. It meant that the actors had the impossible task of not having their back to the audience. Helen managed it by scattering the actors across the space.

Having rebelled and dashed up to the gallery under the lighting rigs, I got a brilliant view on Helen’s very physical directing, particularly in the WWII scenes where the ladies are collecting coats all dressed in reds, greys and blacks and working in gruff balletic movements. The restaurant scene also used a nice trick for directors to keep up their sleeve.

Another era which stood out was the present with politician Jen, played by Nayomie Karen dealing with contemporary notions of social justice. Her caffeinated day having to face many foul-mouths including schoolgirl Nikki played wonderfully by Marie Tay was fun, stressful and brilliant. My only critical contribution to the script would be that I would have ended Jen’s piece with her attending the press conference and speaking her mind, rather than quitting her position of power, so as to end on the ever present character Hope.