Review of: Cause Célèbre at the Old Vic 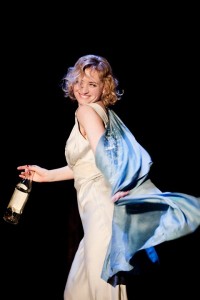 I find it funny that in a time when we think it normal for our female leads to do back flips onto dragon heads with swords in their back pockets, it can also be just as gripping to watch a court drama. The Gwen Stefanie-esque heroine of Cause Célèbre played by Anne-Marie Duff captivates the audience with her casual court dialogue “It’s a case of the flesh being willing but the spirit weak.” She explains of why she no longer sleeps with her aging husband. “Don’t you mean the other way round?” Her barrister asks. “Oh yes, I suppose so.” She says.

This play can be directed either with a focus on the tragic aspect or on the humour. Director Thea Sharrock has chosen the later, by including the backroom banter between the barristers, policeman trying to explain that it wasn’t medical shock that had Alma throwing herself at him, Alma’s clever techniques in dealing with her stingy husband and the slow de-frosting of the rule-loving prison warden.

The play is based on the real case of Alma Rattenbury, who in 1935 was charged, together with her lover, with the murder of her husband who had been bludgeoned to death. Society was scandalised and enthralled by the trial, not because of the crime, but because of the tabloid aspects of Alma’s affair with a teenage, servant lover. The play was written in 1977, so some of it does feel dated in that her sexuality causes moral disgust and outrage, but a lot of it remains relevant, such as themes of fidelity, the choosing between one’s children and the man you love, the catching of sexually transmitted diseases and divorce.

Hildegard Bechtler’s design and Bruno Poet’s lighting are brilliant and elegant throughout. The simple visuals of the ending didn’t quite manage to make me feel like this was a tragedy. Maybe I have become overly dependent on visuals, or maybe this was done on purpose? Anne-Marie Duff says of the two female leads “They both behave inappropriately towards the people they love… But it’s unfair to Rattigan to say she’s the hottie and she’s the nottie.” Niamh Cusack adds “Both of these women are trying to be true to themselves, but how much do they know of themselves? I’m not sure if this is a tragic ending (for Edith) she certainly loses everything she thinks she has.”

Cause Célèbre is playing at the Old Vic until the 11th of June.
Image fromhttp://www.oldvictheatre.com/whatson.php