Review of: Macbeth at the Blue Elephant Theatre 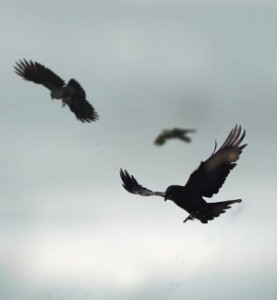 The feeling you get when you see 20 actors on a fringe stage is a mixed one. As a director I’m jealous of the numbers involved and the opportunities they open up, as an audience member i’m excited by the shear weight of bodies and as a theatre producer I’m counting up all those friends and families and the bums they’ll put on seats. But it’s not a guilt free pleasure. Rather like looking at a £1 shirt in Primark – you know that the price you’ve paid can’t possibly cover the cost of labour involved… unless that labour has been shockingly badly paid.

Yet with the government’s cuts biting hard it’s an issue theatre makers are confronted with daily – are we happy to ignore our moral conviction that a good days work deserves a good days wage in order to satisfy our artistic desire to create beyond our means? It’s sad that as I sat in the smokey pre-set of Lazarus Theatre Companies new production of Macbeth at the Blue Elephant Theatre that’s what was going through my mind, but with the political landscape as it is at the moment it’s a daily fact we must contend with.

I was watching a preview performance of Macbeth – which officially opens tonight before running to the 16th April. It began with a lone voice singing a verse of the lords prayer to a tune reminiscent of Tannenbaum.

With the full cast on stage the sung refrain struck a rather sweet note, like memories of christmas past. It seemed like an odd pre-set for what we all knew was to come. And within seconds of the show starting the mood had been shattered with one of two superb set-pieces, combining a fantastically inventive use of torch beams and the full cast of 20 to create a visceral and muscular battle sequence.

This opening setup the expectation that we were about to enjoy a physical, ensemble adaptation of the classic story. Yet sadly this expectation was disappointed. Once the opening set piece had finished the show became very traditional. Physicality, voice and song were all kept quite separate.

The last time I saw anyone tackle the show was during a workshop series with TEATR PIEŚŃ KOZŁA. The philosophy they work with is based on the idea that song, movement and text are all the same, and interchangeable. If you can have a conversation which expresses ideas and emotions in words, you can have that same conversation in movement or in song – and vice versa. A simple rule of thumb is to remove the spoken word and then see if the remaining song, or physicality is strong enough to carry the narrative by itself. If it isn’t then you can probably make it work a little harder.

With each of these elements present in this peice and with the tool of so many actors at their disposal I would have loved to see more emphasis put on ensemble movement, chorus and song as means of story telling. It felt like the piece was constantly on the verge of something far more exciting: but ultimately movement and song were additions to the text, not the instruments used to carry it.

Director Ricky Dukes deserves congratulation on the shear ambition of the production – and if there are elements that could be developed further in the future then that is no bad thing at all, he is exploring very interesting areas of theatre and I am eager to see what he does next. Particular praise should be given to Liam Welton for his atmospheric sound design which did a fantastic job of transforming the small black box of the blue elephant into all manor of dark and brooding landscapes.

Directed and Designed by Ricky Dukes

Production Image by Will Beeston