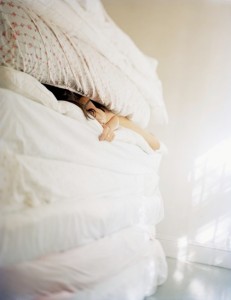 Four female playwrights have put together 7 original pieces set amongst the compelling photographs of the Frameless Gallery. Chloe Massey and Aimee Levey kick off SCENTED in almost ordinary clothes, only separation between actors and audience is the nifty use of a mask.

The first story is ‘ChatRoulette’, perhaps conceptually the most original of the 7. It tells the story of a girl in an online chat room offering to show the men online either her naked body or her naked face, guess which they chose? The other stories go from being about Jimi Hendrix’s loneliness to defining the smell or sock-choice that draws you to a man.

Unless you’ve recently had a hip transplant, the promenade performance format is charming and works well with the exhibition Newertown, who commissioned this play. The kooky ground floor photographs fit in nicely with ‘Rosie’, like you’re the recipient of gossip, rather than a stand off-ish audience member.

Downstairs the photographs and the monologues get more gritty and the staircase and alcoves turn into more of a set space. In ‘Taxi’, which I would criticise a little for verging on the implausible, due to a lack of back story (you might think it, but would you actually invite the cabbie into the back to pay in kind because you missed the last tube home?) but the quality of Chloe’s acting is such that you’re too busy tasting the wonderful awkwardness to notice. There were laugh out loud moments juxtaposed with sadness and Chloe achieved this shared-audience cringe once again in the brilliant beginning of ‘Dead Things’ (I’m not giving it away).

SCENTED felt vivid and original throughout, the proof that you don’t need to spend a fortune to see a great piece of theatre. The final piece ‘Marmalade’ was goose pimple good, thanks to Aimee’s energy and Emily Jenkins’ use of childhood details such as the game Mouse Trap, to twist your perception of her character back and forth. Only a couple of too-rhyming sentences were guilty of pulling you out of the gritty realness. A perfect choice of theatre to pop to pre-cocktails with the girls, as the start of an chatty date or just after work to sponge clean your mind.