Review of: Du Goudron et des Plumes at the Barbican

Fuel for our creative brains 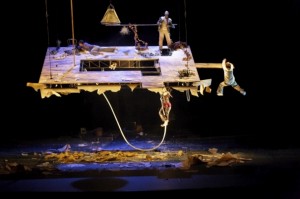 The Barbican’s blurb that this show was inspired by “John Steinbeck’s 1937 novel Of Mice and Men” is a bit of a fib. Du Goudron et des Plumes has nothing to do with Steinbeck (apart from the costumes maybe). It is the latest concoction by super circus-theatre company MPTA and Mathurin Bolze. Bolze is famous in France for having received the Prix du Cirque. MPTA stands for -Les Mains les Pieds et la Tête Aussi- which means Hands, Feet and the Head Also. It’s like the brand ‘Hello Kitty’, a kooky name hiding an empire of hard work.

It’s hard to be impressed by acrobatics when you’ve seen Cirque du Soleil’s O in Las Vegas and have a kung-fu movie addiction, but my eyes were leaning out of their sockets for every second of this 75 minute show. The blend of dance and acrobatic storytelling was performed from a heavily swinging, rising and floating stage. But it wasn’t just the technical details that stunned, it was also the unpredictability from one move to the next.

The performers fought, tick tocked between vertical floorboards, spun and perched like monkeys, they even fell and caught themselves just in time using a rope or their own limbs. Without uttering a single sentence, five people lived and loved and grew on a continuously redefined stage space.

Is this show about survival? Is it about human frailty or the passing of time? Is it a Homer-type ship? Or is it just clowning with acrobatics and a giant prop? I’m not sure, but there are moments of calm, like the man smoking, his dressing gown ruffling in the night breeze. There are moments of cute details, like the girl making a paper skirt and the couple fighting and then kissing violently (so French!) There are also brilliant comedy moments, like the mirror image of the two men, one upside down, both watering their plants, or the dangling light, used for acrobatics, turning up bright just as he is about to grab it to go for a bit of a spin and blinding him instead.

But my absolute favourite moment was when one of the performers, standing dangerously close to the edge of the diving board, doing back flips (as one does), lifts his foot and instead of doing another back flip, kicks the dust, like a bored teenager waiting for life to happen.

Because this is the Theatre Network, I wondered what the value of this show was to us theatre makers. Here is the list of what I’ll be applying to my own creative enterprise:

• Open ended is good, it fuels ideas, let stories be vague, it allows the audience to impress their own interpretation, therefore making it their own
• Contrast drama with the banal (e.g.: back flips + dust kick, or floating in the air + blinded by light bulb)
• Sometimes you can do it without a storyline, but in that case, pretend your work is loosely based on an English classic
• Seamless, effortless look = bloody hard work.