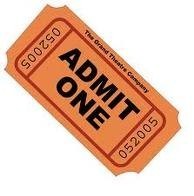 This week Artists Anonymous Theatre Network have launched a campaign to look into the possibility of launching a Fair Trade Theatre ticket scheme. The idea is not only to raise more money for the Arts but to highlight to the theatre going public the terrible pay conditions that exist within the arts. Here’s the thinking behind the initiative:

I (as a director/producer) want to pay my cast a decent wage, to do that i’d need to charge £x for tickets to my show. A different producer decides they are going to undercut my tickets by not paying a decent wage, a cast of actors agree to it and then they can sell their tickets for considerably less than £x. I then have to lower my ticket price to match, which either involves me paying my cast less or keep paying minimum wage in the hope of a sell out show, but risk going bankrupt if it isn’t, which will lead to no one getting paid. Neither of which is good for the industry as a whole. But the former is still better than the latter (small pay vs no pay)… so i end up having to run the show with low pay which then means the next producer along who wants to pay a decent wage is unable to as i’m now undercutting their ticket price. Unless the state steps in to subsidise the project, or set a minimum ticket price, there is nothing that can be done. The producers hands are tied as there is simply not enough money coming in to pay everyone.

So the basic solution we need is either more subsidy or more expensive tickets. The government have made it clear that subsidy isn’t going to be the answer in the short term, and have pointed to the USA as evidence we should all be chasing subsidy from the corporate sector and individual giving to replace government spending. Now as they themselves admit that this wont amount to as much as the Arts Council (ACE) used to give out, and as the amount ACE used to give still wasn’t enough to pay everyone this isn’t going to be the answer. So if we can’t look to subsidy as the answer we’re going to need to find an alternative means of bringing more money into the theatre.

We have no problem with the idea that if we want to buy coffee where the producers have been paid a decent living wage for their work we have to pay more. So what’s wrong with letting an audience know that if they want the cast they’re seeing to be paid a living wage they need to pay more for theatre.

I’ve included rough figures at the bottom of this article – but in simple terms for an average fringe show, three weeks rehearsal, three week run, you’d have to charge around £21 per ticket to pay everyone minimum wage or £36 per ticket to have paid equity minimum.

The suggestion we’ve been discussing is a campaign to introduce an industry standard fair trade fringe theatre ticket to run along side standard tickets. People should still be able to pay around £10 to see a fringe show if they wish, we don’t want to put anyone off attending, but they should know that £10 per ticket wont be enough to pay the performers they’re watching a legal minimum wage (let alone a decent living wage!).

The idea of the scheme is two fold – 1st it would raise money, sadly not enough to pay everyone a decent wage as many people would still opt to buy cheaper ‘unfair-trade’ tickets, but it would raise more money and therefore allow for better pay, even if not good pay.

Secondly, and more importantly, it would raise the issue of the appalling pay in the arts. Audiences simply aren’t aware of the scandalously poor pay of the people who entertain them. People who would never buy clothes they thought were made in sweatshops are perfectly oblivious to the fact that when they go to see fringe theatre the performers have often been paid less than a sweatshop worker.

Long term i don’t believe the answer is for audiences to have to pay more – I believe we need a government willing to subside theatre to the same level we see on the continent. But in the meantime we need to raise this issue in such a way that we don’t damage our own careers, or threaten the careers of others.

*Very rough figures to get a sense of how much we’re talking about:

If you wanted to turn it to equity ie minimum weekly wage of just under £400 then your overall wage bill goes up to £16k, giving an overall show budget of around £22.6k. So if we accept that Equity MINIMUM is the minimum living wage for a performer a fair trade fringe ticket would cost £32 per ticket