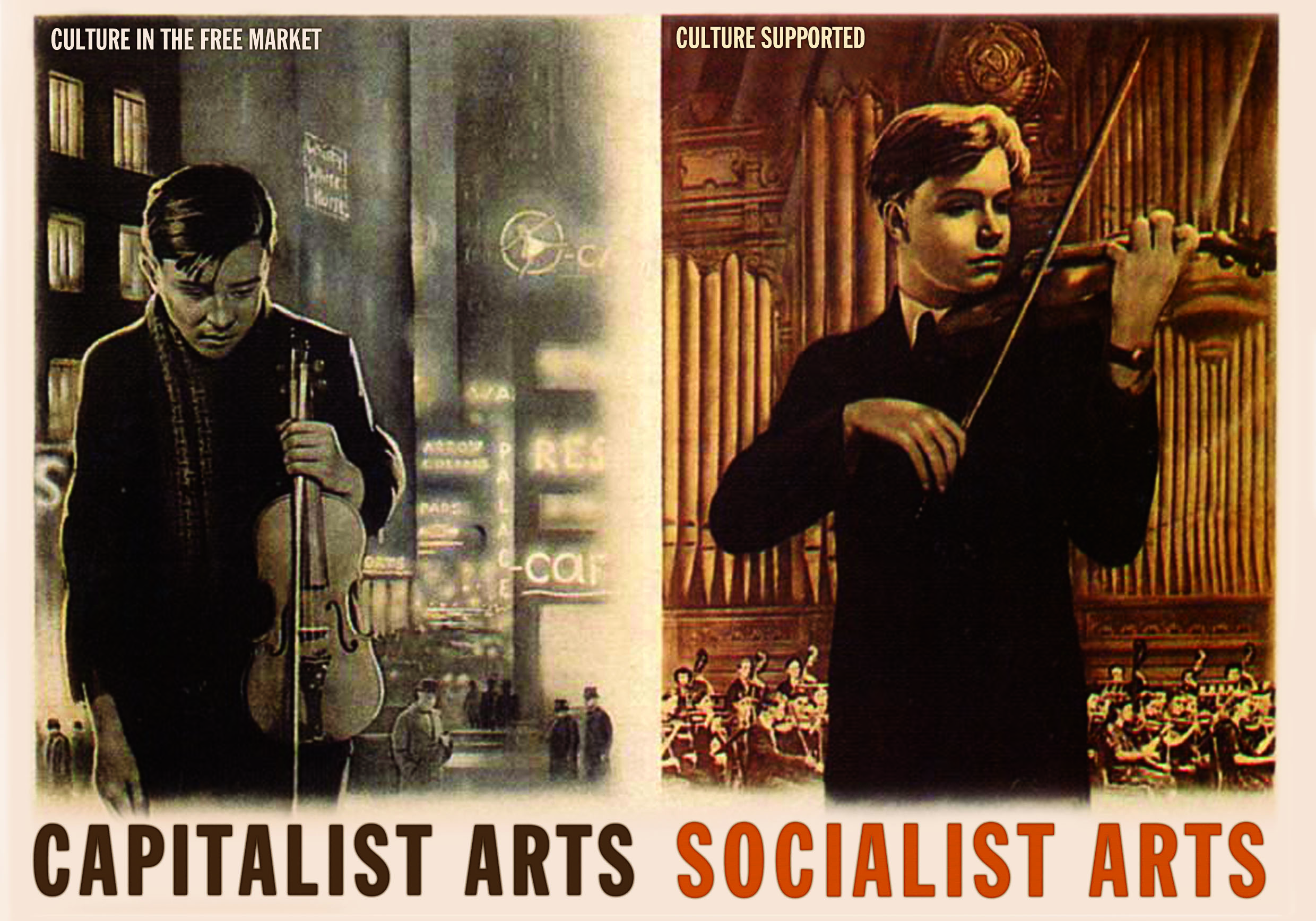 I recently stumbled across a thirties propaganda postcard. It shows on the left hand pane a boy, his drawn tired face hidden beneath a fringe of greasy lank hair, his head bowed, scarf and ill fitting suit doing little to keep out the cold as he walks along a neon lit american street, clutching his violin, as overweight city gents look on with distain. On the panel next to it the same boy, looking healthy and clean, triumphantly plays his violin, surrounded by an orchestra in a grand concert hall crowned with a hammer and sickle.

Now I’m not interested in the reality of this image. Clearly all 14 year old violinists in Russia during the thirties did not play in grand concert halls while their American cousins languished on the cold streets of the great metropolis. That is not what interested me. It was the rhetoric behind the image that attracted my attention. Clearly the purpose of the image is propaganda. The message simple – look at how much better Socialism is to Capitalism. The means for displaying how much better socialism is to capitalism are the arts, and specifically how well funded and supported the arts are under socialism.

Today the debate around the arts is why it should be funded at all. Clearly the author of this propaganda had no such qualms. The postcard takes it as a given truth that well funded high arts are a good thing. In fact all you need to do to show one social system is superior to another is to demonstrate it funds the arts better.

One wonders what the response was to images such as this back in the thirties. Did hardened western capitalists look at it an scoff? Did they point to the Hallé Orchestra, the New York Phillamonic, or similar to show how well high culture faired under the free market? One can only wonder. What is clear is that the argument behind the propaganda wouldn’t work today.

Whatever it is our country judges itself on today it certainly isn’t on the success or failure of its arts. When an arts budget that only represents 2% of total government spend, which is already failing to provide a decent living for most of Britain’s Arts workers can be savaged with 31% cuts, for no reason other than the political ideology of a rampantly free market government, it’s clear that the fate of the arts or artists is not one that bothers them.

No matter how biased a view of the nineteen thirties our postcard is – its depiction seems horribly reminiscent of today. The left hand image of an unsubsidised, failing artists, surrounded by a wealthy city filled with cars, affluent businessmen and neon lit shop fronts – seems more like a poster campaign for current government policy, rather than a condemnation of it. After all if the markets are happy what more is there left to achieve?