Review of: A Minute Too Late at The National Theatre

Price:
From £10
Reviewed by: Alexander Parsonage

A masterful display of physicality, a seminal piece of British Physical Theatre that changed the face of British drama.

Complicité return to the National with A MINUTE TOO LATE, devised by the company and redirected by Simon McBurney, who appears with Jozef Houben and Marcello Magni. A Minute Too Late is a show about death. A comedy of mourning; it was the second piece Complicite created, 21 years ago.

As a play it is very simple. Essentially consisting in a number of set pieces that trace the events directly after the death of a man’s wife. But this does not do Complicité justice. It is a tour de force of physical perfection, both knowingly theatrical and utterly believable. The world they create might accept its existence is on a stage but its inhabitants are wholly a part of it. Moving with unrelenting energy from one comic encounter to the next, the show charts the totality of the embarrassing situations, insensitive comments, and general teeth grinding faux-pas which can follow a bereavement. 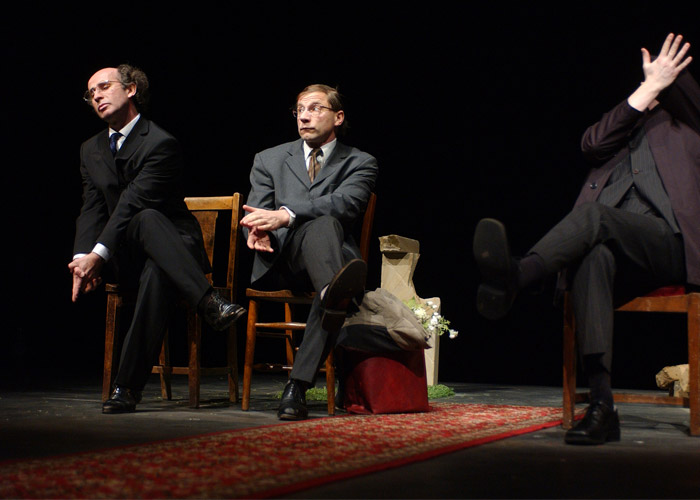 If there is a criticism to be made it is precisely in the un-relenting drive of the play. It scarcely lets us take a breath. There were simply too many little set pieces for us to build a coherent linear narrative. On occasions too, it felt as though the devising process had been too enthusiastic; including scenes simply because they had been thought up rather than because they helped to tell us the story. This has become something of a cliché of devised theatre in the twenty one years since A Minute Too Late was first staged and yet the sheer energy, enthusiasm and originality of the piece allows it to transcend its subsequent imitators.

Whilst this means that the show is a very enjoyable experience you couldn’t help feel that Complicité barely scratching at the surface of what is a rich and fascinating subject matter. There is a huge wealth of bittersweet comedy surrounding death and bereavement. It is a time of life at turns surreal, devastating and hilarious. But we never knew the characters nearly well enough for this depth to be explored. Perhaps this was partially a result of the space: It felt far too large for the show, drowning all the little nuances, looks and moments that could have brought us closer to the characters.

I would love to have seen the piece in its ‘small and sweaty’ Edinburgh debut. As it stands this is a masterful display of physicality, a seminal piece of British Physical Theatre that changed the face of British drama. If this production stands simply as a monument to that success it is no small achievement – that it is hugely enjoyable as well, is a very pleasing bonus.