Review of: The Comedy About A Bank Robbery

A glorious piece of theatre mixing commerciality with inventiveness and providing a splendid night out.

The Comedy About A Bank Robbery is just one of those pieces destined to be a sure-fire hit. Fast-paced, witty, and with a sweat quite literally dripping off the actors, it’s currently celebrating it’s second year as part of the West End bunch – and with an extension of the horizon, it seems like it might continue to be a staple of the Piccadilly Circus thesp group for some time yet to come. 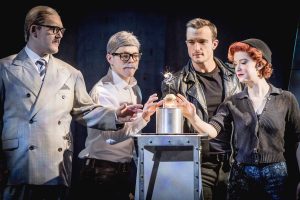 As with most corkers, it starts off rather simple – two baddies (crooked bank manager Robin Freeboys, violent crooked crook-crook Mitch) are both interested in a rather large and unfeasibly sparkly diamond.  Add in a sprinkling of lovable but more small-time criminals, many cases of mistaken identity and (of course) the requisite trousers-down-hobbling-around trope and you’ve got yourself a pretty fantastic evening at the theatre.

It’s very much a piece of endurance. A romping bedroom scene that takes up half of Act 1 is a particular highlight, with Samuel Fogell, Holly Sumpton and Matt Hunt displaying nigh-unbelievable comic timing, leading the audience around the complex intricacies of the scene with style and panache. Praise must go to Fogell who, saddled with the rather vapid ‘hero’ character, nonetheless manages to milk what little personality Sam possesses while jumping, rolling and sprinting around the space for all he’s worth.

Joyfully milking every single gag possible, there’s a wonderful feeling of camaraderie between audience and performers – and while this does sometimes let the tension slip, it never gets in the way of the cheek and exuberance that’s a hallmark of the piece. Leonard Cook and Peter McGovern’s wall-based capers in particular are a masterclass in farcical comedy – while absolutely nothing to do with the plot, the timing and talent of both actors means we’re never bored or distracted, and showcases a stunning imagination on the part of the creative team.

Accompanied by some jaw-dropping vocals and incredibly close harmonies, it’s always lovely to see pieces where scene changes are considered a part of the theatrical action, and not just an annoying bit of movement that has to be wedged into the story. The only fault I can pick within Comedy of A Bank Robbery is the speed of the ending – while I won’t ruin it here, a lot more fun could have been had with an unlikely twist, which appears and disappears so quickly that one never feel like it’s had time to be truly appreciated. However, this is very much picking holes in what is a gloriously solid piece of theatre, mixing commerciality with inventiveness and providing a splendid night out.