It is difficult in Britain to conceive just how Dante dominates his country. Even more than our Bard, Dante permeates Italy with children growing up able to recite his poetry by heart unlike the Anti-Stratfordians of our own education system. So imagine my delight when the couple sitting next to me in the Baron’s Court theatre were Italian. They seemed enthused by the energy of the young cast in the So It Goes Theatre Company’s Production of the Divine Comedy, gesticulating animatedly at key scenes. They didn’t seem to mind in the slightest at this break-neck run through of the over 14000 lines of their national poet – director Douglas Baker certainly has ambition, something we need more of in smaller venues. It is to his considerable credit that the massive surgery he has performed on the Commedia to bring it under ninety minutes doesn’t detract from the essence of Dante’s vision, making intelligent use of his actors, props, and space. 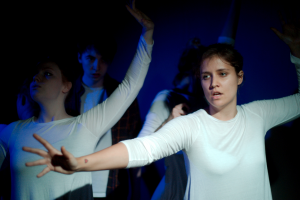 Here is a black cavernous basement with a white rear wall, doubling as a screen for projections. The poet Dante, depressed and suicidal, ready to give up on life, comes across a stranger who happens to be his hero, the Latin poet Virgil who insists on chaperoning Dante through his mid-life crisis. Together they encounter many strange and terrifying apparitions on their journey into Hell and beyond. First encountering the Procrastinators, groaning and aching together like a human centipede, ‘the world has passed them by’, so lazy they couldn’t even make it into Hell proper. Oh dear. This reviewer felt the guilty pang of recognition (as my editor knows only too well).

Next, the three shadow puppets heads of Cerberus combine exquisitely with the writhings of its victim to provide what is the first of many effective uses of light, movement, and projection throughout the night. The physicality of the chorus, choreographed by Matthew Coulton, is particularly impressive given the tight constraints of the space.

From Inferno to Purgatory which is a Tube journey (ain’t that the truth) on the Central line to Hainault by the sounds of the commuters on board. Beggars on this train in limbo are consoled by Dante, he will rescue them, not in the here and now, but by immortalising them in his poetry. Throughout the production it is the power of the written word that is returned to again and again.

Homer, the only poet superior to Virgil, has written the character of Ulysses so convincingly that he too is condemned, his non-existence no impediment to eternal damnation. Dante knows the power of literature, how a good story can send men to hell or enable them to ascend to heaven. Using his silver tongue Dante escapes sticky situations on more than one occasion through his odyssey. Alex Chard’s emo Dante comports himself well, by turns quizzical and earnest, his ultimate destination is with God via a final confrontation with his beloved Beatrice in Paradise – here played more aloof than alluring by Kathryn Taylor-Gears.

Jack Blackburn’s no-nonsense Virgil, having led his young charge through the circles of Hell and the Central line of Purgatory, stops just before the pearly gates of Paradise. The famous question of whether, ’a pagan can enter heaven?’, consumes Dante. If a man as noble and just as his guide, one who preaches peace, love, and knowledge is denied entry then is it a place worth inhabiting? This modern individualist Dante would rather keep his integrity than lose his Virgil.

Bereft by all this injustice Dante refuses to continue. In a very meta scene of this very meta play he questions the value of art. His whole life spent in poetry only to end up having no edifying impact whatsoever. He comes to the crushing realisation that we all face. Life goes on. Poetry or no poetry. But it precisely this human frailty that makes life worth living. Humanity in all its humanness. Dante’s ability to reify his gift into something others can be transported by is what make this production worth the trip.

Only one false note jarred. An interrogation by the saints, John, Peter, and James, which in the original is a subtle theological discussion between Dante and his interlocutors about faith, hope, and love is here reduced to a crude waterboarding scene by men in builders’ Hi-Vis vests. Iconoclasm without purpose, done with an eye to that dreaded contemporary blight, ‘relevance’, succeeds only in highlighting the majesty of the original. It raises the question; can we pagans enter the Divine of the Comedy?