Review of: Angel at the Arcola

Whilst sombre Thebes Land runs upstairs, a rather different beast runs in the downstairs basement space of the Arcole. The action-movie-esque Angel has it all; explosions, run-and-gun style raids, fanatical villains, and of course, a reluctant hero. Only it’s all played out with one barrel and one woman – big budget this ain’t. There are no sound cues and certainly no music. An atmosphere is generated by the judicious use of lighting but mainly by the conviction of Avital Lvova’s singular performance. 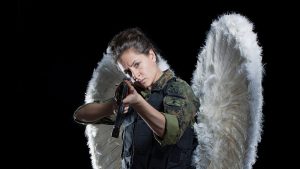 Rehana is a young girl living in rural languor on the family farm in Northern Syria where she’s grown up longing for a life away. Her ambition to be an attorney, “like in Boston Legal”, draws the ire of her farmer father. A tough-but-loving brute of a man he is determined to give her an alternative education. Learning how to become a crack shot by shooting Orangina cans at his command she despises the effect it has on her and renounces violence. She rebels against his stubbornness by becoming a ‘nerd’ and immersing herself in studies. Pity then that her town soon comes under siege by an ISIS intent on destroying the Kurdish YPG who have declared autonomy in the region. Rehana and her mother escape to Turkey with the plan to meet up with dad later on in Europe – when it transpires that he won’t be joining them, that he stayed to protect his ancestral land, Rehana resolves on a daring suicide mission to save him. She becomes Angel. Lvova’s supple physicality empowers the action; writhing against the wall, snaking around on the floor, running from the enemy, leaping for cover from incoming fire. She does it all with a soldier’s economy and a scholar’s aptitude.

Eventually Angel encounters a unit of female guerrillas. Their distaffs replaced with Dragunov sniper rifles. Her father had the same rifle and this predisposes her to be a sharp shooter. She becomes a talisman to the group picking off ISIS recruits like so many Orangina cans. But Angel has an introspection they lack and killing plays upon her mind. The more she kills the deader she becomes – “We must be as bloody as the tyrants themselves”, her father’s words echo imploringly.

It’s not all despair. Writer Henry Naylor’s comedic roots are in evidence early on; jokes about Star Trek, Beyoncé, and a very funny running gag about Marie Curie. All the humour makes her tragedy that much more poignant. Naylor’s well researched script fills the gaps in Rehana’s actual story with episodes credible enough to immortalise her. Angel is now a latter-day Joan of Arc whose myth has steadily grown. A fearless woman who abandoned a potentially lucrative career to defend her homeland and resist an evil tyranny. Did she really kill one hundred ISIS fighters? Did she really escape her own execution, twice? When the legend becomes fact, print the legend.