Review of: Callisto: a queer epic

Callisto is terrific, though it would be even better if it really were a queer epic

Four plots run alongside one another. In Stuart England, a woman’s husband is outed as a trans man; will she denounce him to save her own life? And: two women adult performers at “Callisto Studios” fall in love and seek to outwit their chauvinistic boss. And: ambitious logician Alan Turing and lapsed Catholic Isobel Morcom square off as they try, in their different ways, to mourn Christopher Morcom, Isobel’s son and Alan’s first love. And: on a moon-base in the twenty-third century, a man and a robot struggle to express their love for each other.

From the start Callisto is sharp, slick, precise. It has to be: there’s so much material to get to in its eighty chock-full minutes. Most actors play multiple roles, and their characterisation is neat and tidy. The original music, by Tom Stafford, trades in ebbing and flowing electronic drones and fragments of finger-picked guitar; it’s effective and well deployed. In Howard Coase’s script, symbols—utopia, an apple, “Callisto”—float free of their origins and begin to permeate all four substories. 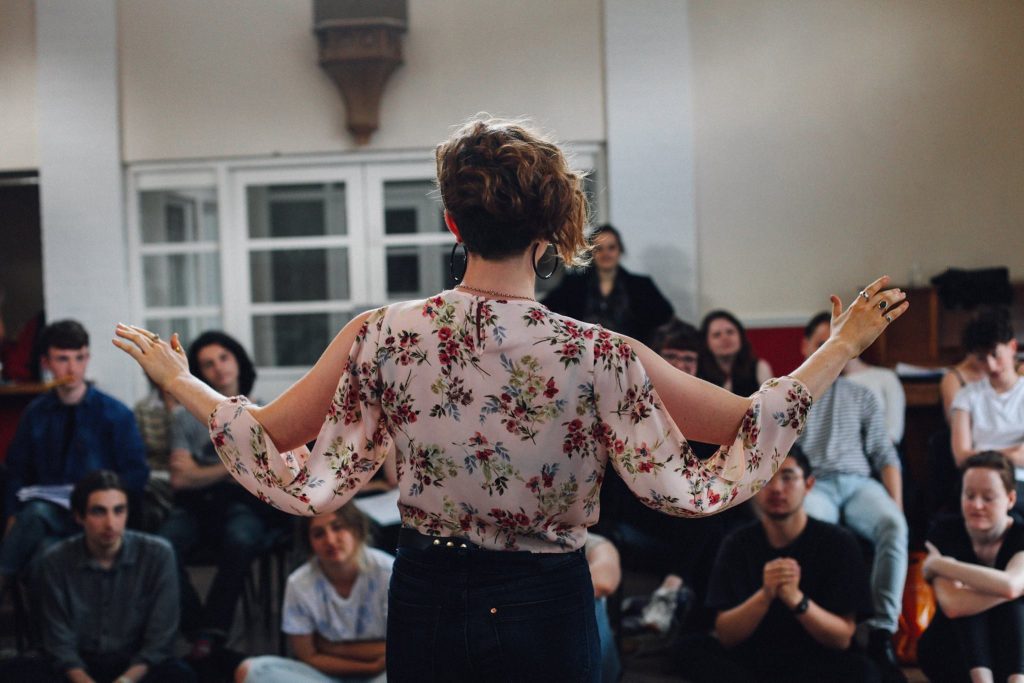 Thomas Bailey’s smart, pin-sharp direction piles the scenes on top of one another, embracing the script’s fragmentariness, creating superpositions of events. By letting the scenes inform and illuminate each other, Callisto sheds a light that is sometimes funny, sometimes poignant, always carefully controlled. The big exception is the story set in the future: ideas of virtual reality, a dying Earth, artificial intelligence, and the capacity of robots for empathy were thrown into the air, but I found it hard to see how they fit together and sometimes hard even to follow what was going on between the two characters. The Turing–Morcom plot, by contrast, is simple and moving, and the Wildean Isobel has all the show’s best lines. Alan, whom Isobel accuses of hiding Christopher’s letters from her, makes the excuse that he thinks Christopher, before he died, might have inadvertently discovered Pluto. Alan kept the letters, he says, because he wanted to check the calculations. “An apology would have sufficed,” Isobel replies, “a planet is hyperbole.”

If I were being picky, I’d suggest that the excellent Callisto doesn’t quite live up to the claim made by its subtitle: “a queer epic”. Despite its scope—it’s true, there’s a profusion of historical locations and of emotional states—the kinds of queerness it actually depicts are quite narrow. They are also, generally, clustered toward the more socially accepted kinds of queer identity. There are three gay couples and one trans man, all white, all, apparently, middle-class. There are other facets of queerness. Exploring or acknowledging them might have given Callisto’s aspiration to be “epic” a better shot of being realised.

Still, that’s a criticism of the claims the play makes for itself, and not, really, of the play itself. For the most part, it’s a joy watching the Callisto’s plots unfolding at breakneck pace. It’s refreshing to find a show that reinterprets different historical epochs through an unabashedly queer lens, and that finds the time to be so moving and witty while doing so. The only trouble with the set-up, the four puzzle-box stories running alongside one another, is one that it would be hard to mitigate against. The last fifteen minutes become a repetitive cavalcade: resolution follows resolution, like a slot machine; four apples spin into alignment, and it all lights up.