Review of: The Armour

intimate, emotional, a fitting mirror to cultural changes over the last 143 years

Time is a dominating factor in this new work by Defibrillator Theatre and Ben Ellis, following on from their Hotel Plays (Tennessee Williams) at the same venue last year. 2015 heralds the 150th anniversary of The Langham Hotel- incidentally the first ‘Grand’ Hotel in Europe and the company celebrate it in some style, taking the audience back some 143 years to just after the birth of The Langham. 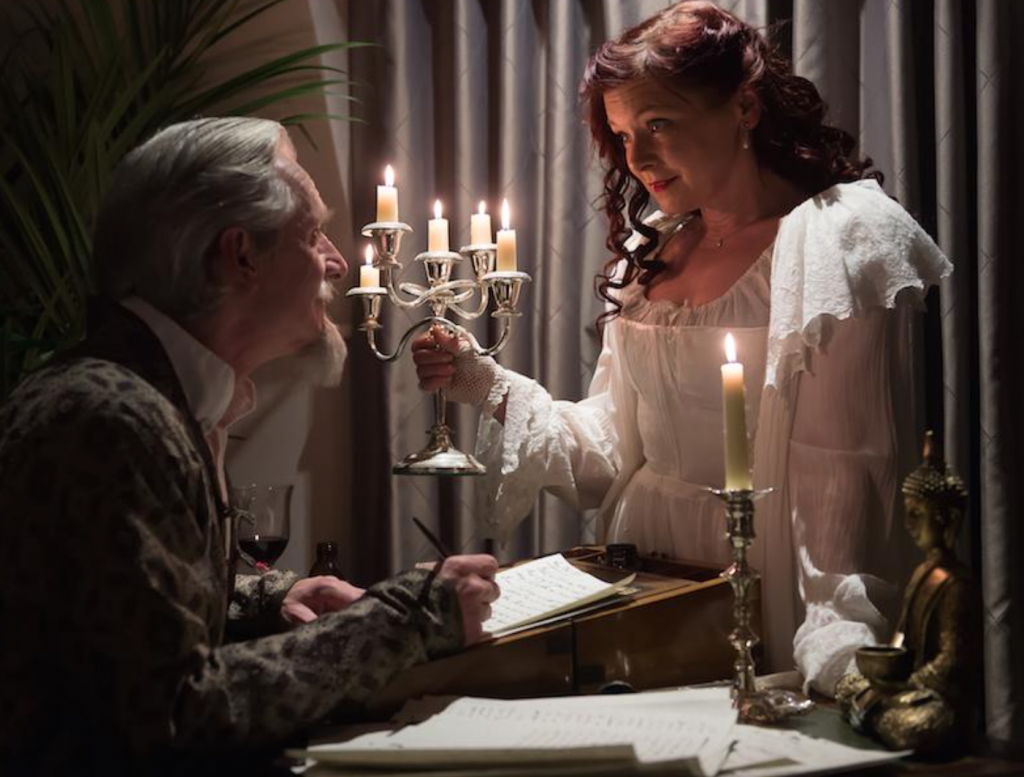 But we start at the end of time in this site specific piece- or rather, present day, with the audience ushered into the soft plush interior of The Langham’s Nightclub. Hannah Spearitt, formally of S Club 7,  plays Jade, a moody in the- process- of- a- break down pop star, who refuses to show up at her concert at the O2, where the crowds are waiting drunk on Alcopops. Her manager Franky (Thomas Craig) pleads, cajoles, takes a funny turn on the couch in role play as a pretend psychiatrist, before persuading the star she must turn up. Thematically, one is reminded not just of the kinds of people who frequent such hotels in present day Britain- sure, isn’t this kind of thing happening at a lot of hotels in Central London? One wonders. But also of the ‘aloneness’ staying in a hotel brings. It’s a strange thing to come and live in a hotel as an isolated unit, with no where and perhaps no one to turn to if things go wrong, when all around you, you are surrounded by staff who live in a community and who work together, play together and a whole lot more ( I should know, I used to work in such a hotel myself).  The action is promenaded all around the audience, Hannah Spearitt makes her character sympathetic- at least I thought so- and there is a lovely relationship revealed between her and her emotionally intelligent manager. Connecting this play, with the end play, is a rather magnificent overcoat from the 1870s which Jade has stolen out of its glass cage- ‘I want to see it live again’ she pronounces. Quite right too, we think, although the coat seems wonderfully like the ghosts we experience- exhibits shut up in a cage. But there is another thematic concern that dominates the next two plays and illuminates a cultural shift over what concerns us, the types of people staying in hotels now, and the concerns of a different era.

Play two plunges into the 1970s and towards the end of the Vietnam war. American shipping container man Peter (Simon Arwen) and his business wife Eloise (Siubhan Harrison) wait to take part in a BBC interview about Peter’s controversial plans to change the Docklands. At this time The Langham was taken over by the BBC whilst its own buildings were being refurbished. Polystyrene cups, a make shift attempt to block out light and provide non existent sound proofing using chip board, give the room an almost rebellious anarchic atmosphere, at a time, I suppose, when the BBC was just that. Not too old itself, we have a sense of new frontiers being explored not just by Peter and Eloise but also by the beeb. But gradually, in this half hour episode, we learn the real reason behind Peter’s drive to create ‘a Republic of Capitalism’ (the irony being we have just come from there in the previous play) and we are on tenterhooks as we oscillate back and forth between the emotional extremes of Peter and Eloise’s fracturing relationship.

The last of this triptych is set in 1871 and features Emperor Napoleon III’s stay in exile (he really did stay at The Langham) on the back of the creation of the Third Republic in France. Set in two rooms, the most grand of them all, the performance is lit by candles as the Emperor (impressively played by Sean Murray, who wonderfully captures an austereness mingled with incomprehension for a fading empire) is cared for and supported by his wife Eugenie ( Finty Williams). The dynamics of role play- there is a wonderful moment where a Chaise longue becomes a boat to carry Napoleon triumphantly back to Paris or to China, where he dreams of escaping, are again explored- another common theme to all the plays- and we learn the interesting facts surrounding the invention of margarine, a more affordable substitute invented by the Emperor for France’s then armed forces and poorer classes.

So ends the 90 minute performance, and although the inbetween bits- getting to and from the different levels of the hotel for example- could be more immersive, one wonders whether the point is that they are not. We are in a hotel where presumably, time seems to have stopped. The characters seem almost trapped within their environs and the hotel walls- they are exhibits and we are ushered around as if this is so- without fanfare and in a manner that is matter of fact.

And we are given a short look at how our cultural thematic concerns have changed. 1871 and 1973 concern themselves with the progression of mankind and political and financial power. The plays deal with the epic, with the unknown, and with personal trauma brought on and influenced by a social and political engagement. These characters, Napoleon, Eugenie, Simon and Eloise are connected to their countries and their histories by an umbilical cord. Fast track to present day and the thematic preoccupations of conquering have not changed, although the gender of the conquerors has, and also, more importantly, the environs within which these concerns will be played out. We swap countries, class preoccupations, the building of an Empire, the creation of Capitalism as an idol for a murdered brother, for a pop star’s quest for fame and money- frontiers of the older plays are countries and maps, now our landscapes have narrowed and  the only frontier left to conquer seems to be that of the Arena at the O2.

The Armour also deals with a bit of meta theatre. Libby Purves already writes about the intensely theatrical nature of hotels and the opportunities for voyeurism that they provide, but hotel experiences are also a conundrum, as the title for the three plays suggests. The Armour means armoury, defensiveness; emotionally a person can be defensive, or cover things up- and we get that in all the plays, as if staying in a hotel provides people with opportunities to hide but then, as we see, steadily reveal themselves. Hotel rooms act as both the armour against intrusion and an intrusive audience but also, ultimately, like our greatest theatrical stages, confessional boxes too.

Warmly directed by James Hillier with some star studded performances from all the cast, and embracing the close scrutiny that such theatre opportunes, The Armour’s canvas is wide and telling, a fitting mirror of our changing cultural, political and social concerns over 143 years.

The Armour continues at The Langham Hotel until 4th April.