Review of: Shakespeare in the Squares: A Midsummer Night's Dream

Price:
depending on venue
Reviewed by: Anna Zanetti

Performed in London’s most beautiful squares and staging THE comedy for summertime: Shakespeare in the Squares returns in all its glory.

I don’t think you can get any more summery than this production. Performed in London’s most beautiful garden squares; exploiting the natural surroundings, basking in the glorious evening light; sporting festive bunting and fairy lights; featuring happy songs and jesting; staging the Shakespearean comedy for summertime – you get the gist. Following the success of Much Ado About Nothing (2016), Romeo and Juliet (2017) and As You Like It (2018), Shakespeare in the Squares returns in all its glory.

If the choice of play is a relatively easy win, its adaptation is a success on pretty much all fronts. More often than not, Shakespeare’s comedies would incorporate music and dance, especially at the end. Director Tatty Hennessy takes this even further: the show opens with the whole cast singing and dancing to ‘In The Good Old Summertime’, which couldn’t be more appropriate. Already feasting on drinks and picnic food, the audience is immediately transported with extra amusement to the court of Duke Theseus, the fairy kingdom of Oberon and Titania, and Peter Quince’s hilarious theatre company.

Setting the play in 1920s Britain works possibly more on aesthetic rather than conceptual grounds. As well as some funny ex tempore insertions (from “A calendar! Google! Anything!” to “Jesus Christ almighty!”), the most successful update that’s being made to the play are the stunning costumes. Think burgundy velvet, shiny leggings, stripy baggy trousers, cream-coloured waistcoats, circus-esque blazers – a triumph of textures and colours. And the actors master the (impressively high) number of costume changes with spectacular skill. 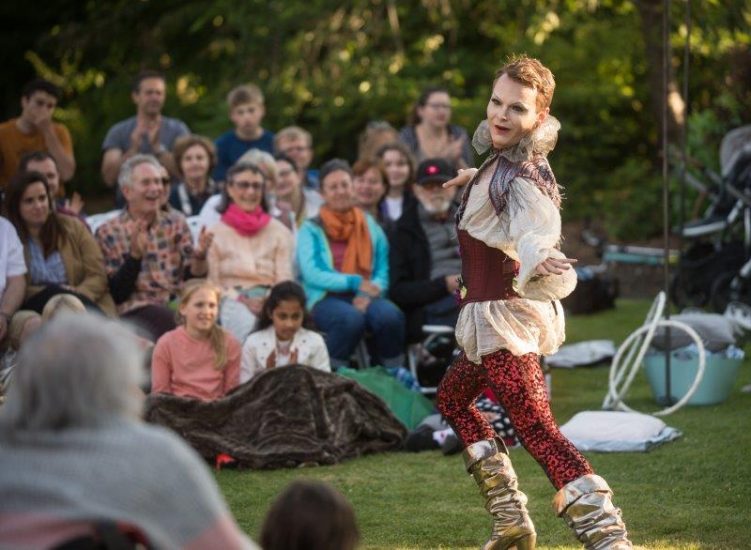 While the mere presence of beautiful costumes wouldn’t on its own make a great show, the cast performance strongly across the board. Standing out is Jodie Jacobs as bragging/clueless Bottom and James Tobin with his lazy/cheeky Puck. Production-wise, the play gives much space to the love quadrangle of Hermia-Lysander-Helena-Demetrius. All four are pretty remarkable, and their deliveries were enhanced by some great physical theatre, especially from Riad Ritchie (Demetrius) and Hannah Sinclair Robinson (Helena), whose exchange over Helena’s unrequited love had touches of the squirrel scene from The Sword in the Stone (this – you’re welcome).

One of my favourite things was seeing the actors actively stepping into the sunlight that was filtering through the trees, especially in order to be more conspicuous at crucial moments. You know what they say:  ‘If the mountain will not come to Muhammad, then Muhammad must go to the mountain’. So if we’re in a garden and there’s no spotlight to illuminate the actors, then the actors must make themselves prominent in other ways. And if you are too lazy to go and see Shakespeare in a theatre, then you’re lucky enough that Shakespeare is coming to a square near you.