Armed with just a chair, Lewis Doherty uses physical theatre to embark on an epic quest immersing the audience in a larger than life, Game of Thrones-style adventure. With the King’s daughter captured by the legendary Gorn the Dragon, Lewis’ latest character BOAR sets out on a heroic journey to collect the biggest bounty in the land and save Skadi from destruction.

Can you tell us a bit about BOAR? 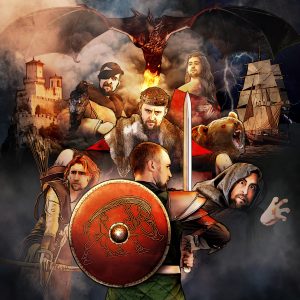 BOAR is an one man comedy fantasy adventure tale set in the Kingdom of Skadi. The King’s daughter is captured by an evil dragon and the King enlists the help of BOAR and an unlikely group of heroes to save her.

Where did your inspiration for the show come from?

Mostly from film, tv, comics, and games. Just a lot of popular culture and cult culture references really. Ultimately all the shows are a pastiche of certain genres – everyone knows them, even subconsciously. I really enjoy tapping into the absurdity of the tropes certain genres utilise and picking them apart

You take on over thirty characters, as well as the props and sound effects. How do you keep up stamina in such a physically demanding show?

I’ve no idea, I think I was always a very energetic kid so that might have something to do with it. I go running quiet a lot – that’s only fairly recently though. I did a marathon in Copenhagen this year so I suppose that sort of training and discipline helps… I could be WAY fitter for the show though. If you’ve seen it you’ll know just how much I sweat. To give you an idea if you haven’t; I wring my t-shirt out at the end. 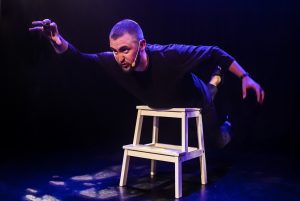 If you could be your own fantasy adventure character, who would you be?

Rathraq from the ‘RUMBLE’ comics by John Arcudi & David Rubín. It’s about this warrior god from another realm that has his body stolen and held hostage. So his spirit is put inside a scarecrow and left on earth. The story is all about him trying to get his old body back. It’s well written, funny, has some spectacularly visual set pieces, and the art is amazing!

BOAR is the second part of a trilogy, following on from last year’s WOLF. What have you got planned for the final instalment?

I can tell you one thing… It’s called HAWK