Review of: The Slightly Annoying Elephant

A fun romp with a big blue elephant in this theatrical adaptation of David Walliams' picture book with the occasional song.

This charming show at the Little Angel Theatre based on a David Walliams’s picture book of the same name will delight younger audiences, even if the big blue elephant really is “slightly annoying”. 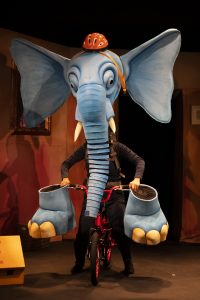 The show opens with Sam (played by Heidi Goldsmith) at home alone, in a simple set of a living room. He reaches for the biscuit tin and settles himself down to watch his favourite cartoon when the doorbell rings. As he wonders who might be at the door, we get the first of the show’s several songs (written and composed by Tom Gray). By the time the song has ended the children in the audience are desperate to meet the elephant behind the door.

His entrance is not disappointing – a big blue elephant head, huge feet and a large bottom, that struggles to get through the domestic door. The elephant doesn’t stay like this throughout the show, however, and he loses his big bottom after a trip to the toilet (plenty of giggles at the poo noises). This was confusing to my young companion, who also couldn’t understand why the elephant’s ears kept detaching from the body and reattaching again (and neither could I).

The show is pretty faithful to the book. Sam accidentally signs up to adopt the elephant on a visit to the Zoo  and we journey through all the annoying things that Walliams created for the elephant to do – having a bath, eating all the food, breaking Sam’s bicycle in an attempt to exercise and finally inviting all his friends to come and stay (Sam forgot to read the small print). Elaine Hartley, playing the elephant, manages to make the repeated refrain “silly boy” particularly annoying, but the two actresses work well together on a small stage. The show somehow lacks punch and I craved the introduction of some different styles of puppetry to tell elements of the story to add some variety. (My young companion complained that the elephant wasn’t really a puppet but rather a costume).

However fans of David Walliams’s picture book will be delighted to see the characters realised on the stage.